The London Transport Museum has an excellent series of tours exploring the hidden, disused/reused parts of otherwise busy stations on the London Underground.

New to the Hidden London series in 2022 was Shepherd’s Bush Station. These pictures were taken in October 2012. 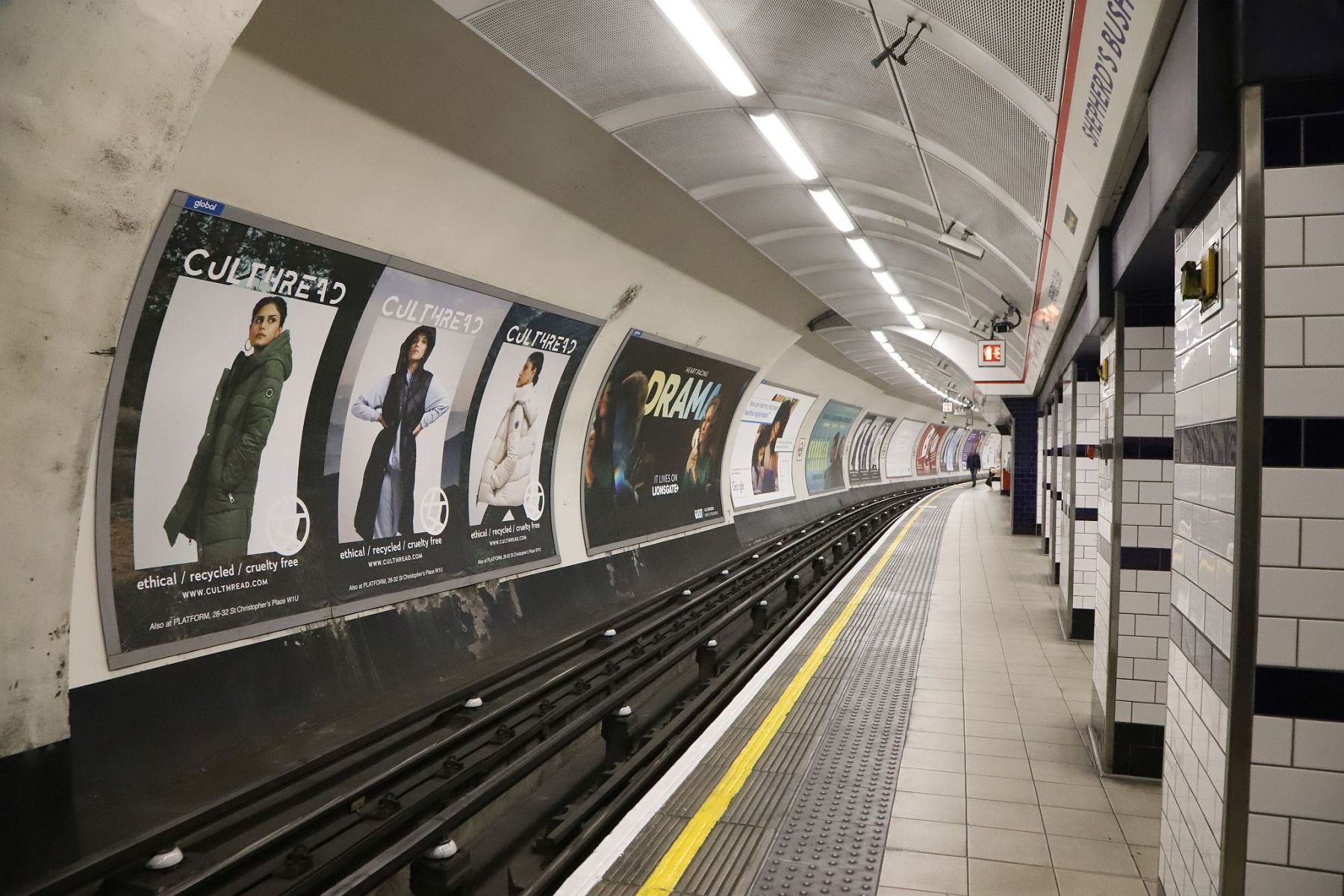 The Shepherd’s Bush Station tour by Hidden London is split into two parts. The first was the ventilation passage used as an air raid shelter in World War Two, reached by a staircase at the far Eastern end of the platforms where the trains dive back into the running tunnels. Once up the narrow staircase, across the bridge and passing through the door, you enter into a much larger tunnel built to improve air flow through the station. 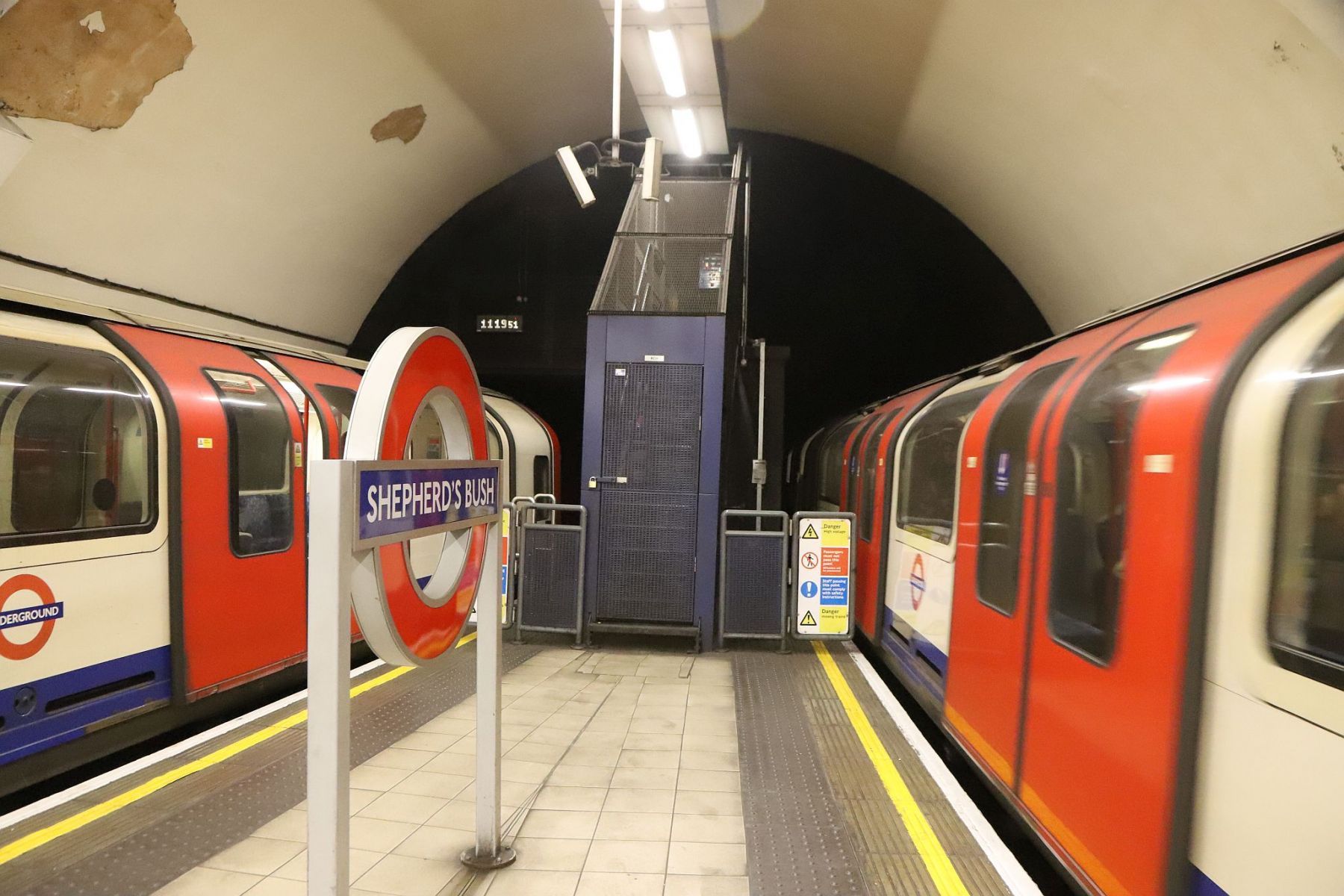 The thing that you notice first is the fan, or at least the noise of the fan. The guide made a valiant effort against the noise and delivered his piece. The commentary from both guides was excellent. The commentary is sent through as a PDF a few days later so you don’t miss a thing. 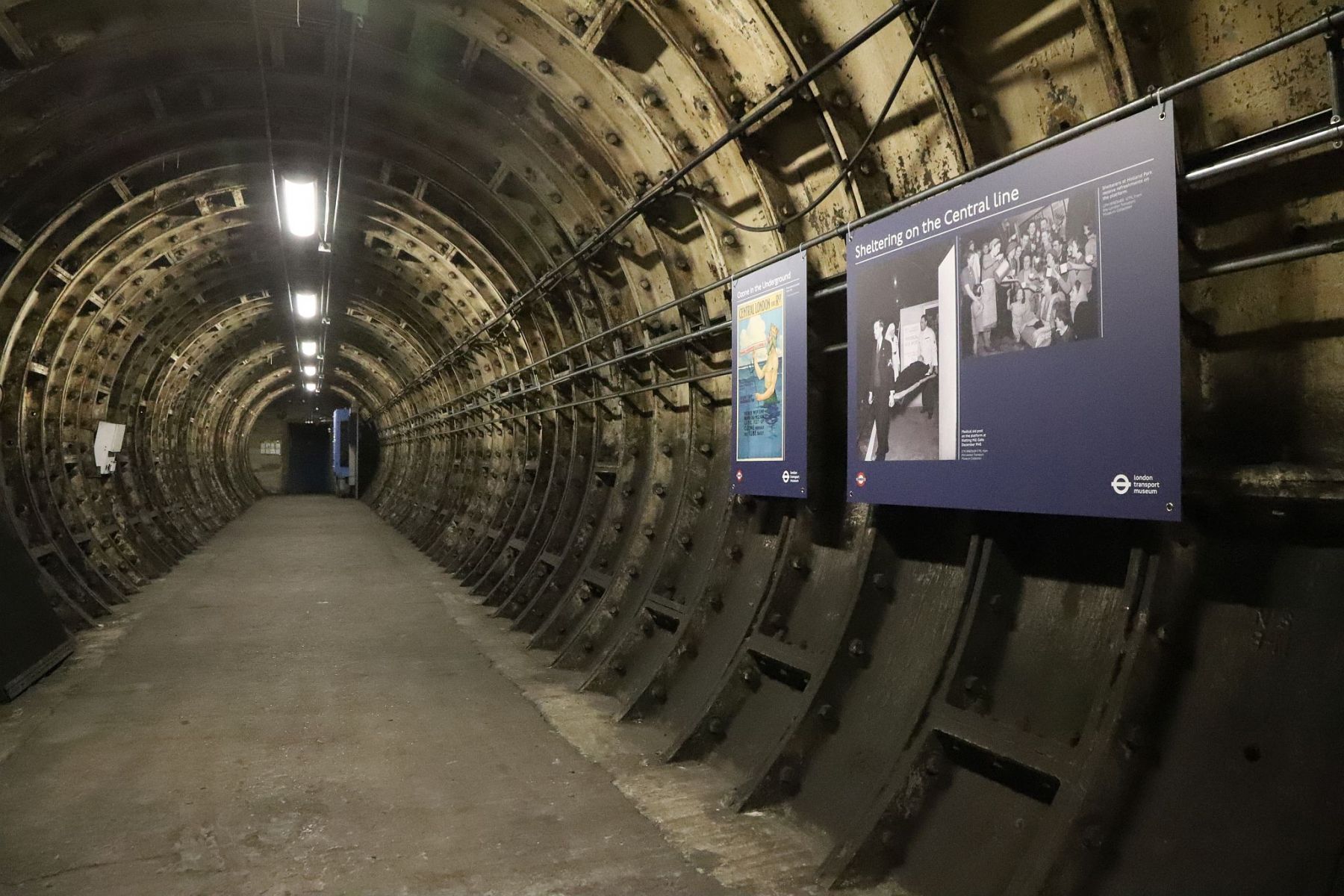 Looking down the length of the air raid shelter tunnel. The entrance door is just to the right, outside of the photograph. The guide told us the tunnels painted in creamy yellow were those that had been used as air raid shelters in World War Two. The information display boards are at every stop of the tour around the station. 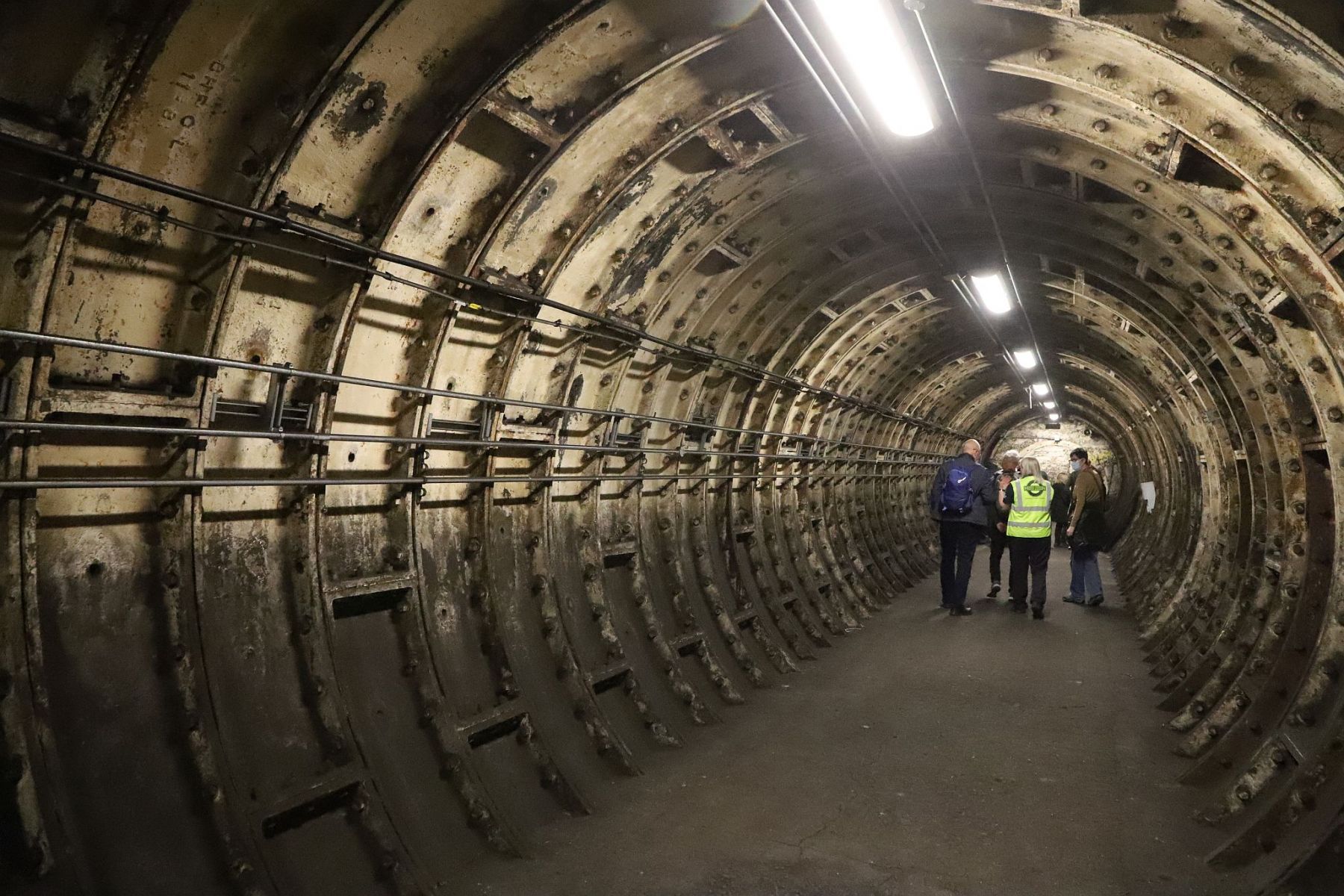 The tour group are walking back to the entrance door which is in front of them to their left. 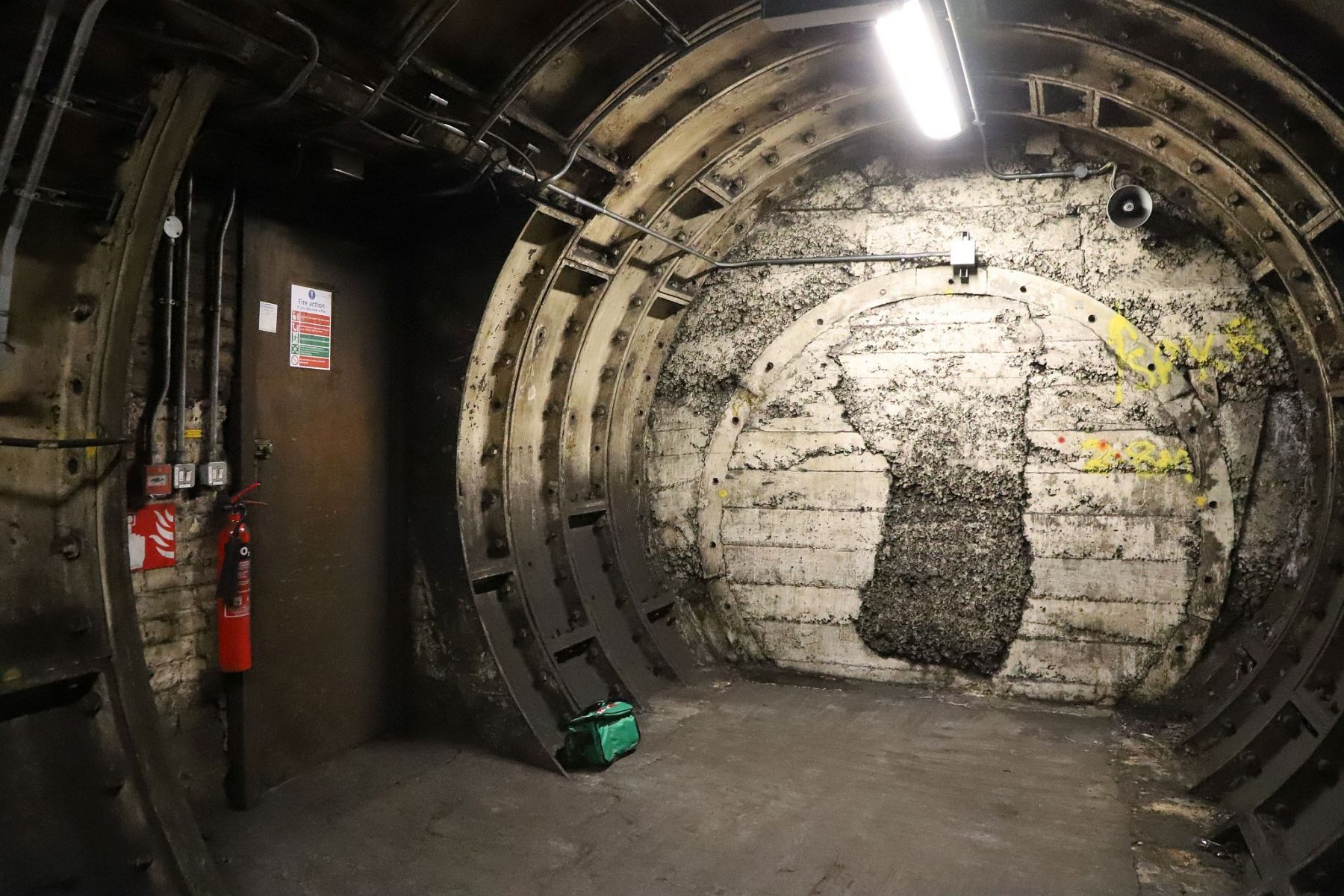 The entrance door to the air raid shelter tunnel and the tunnel end.

Through the Double Door

Then it was time for the second part of the tour. We retraced our steps back to a door at the bottom of the emergency stairs that we had passed by without noticing. Through that door lay some interesting lift shafts and some particularly dark and dirty tunnels – exactly what the group had come to see.

There are a number of stations across the London Underground network that have abandoned lift shafts, left behind out of use after escalators were installed.

The original lift shaft, in which the emergency stairs are now located was also unusual for having three lifts inside one shaft where you would normally find two. The lift in the middle was rectangular, with the other lifts on each side being a trapezoid to fit within the remaining space of the circular lift shaft. 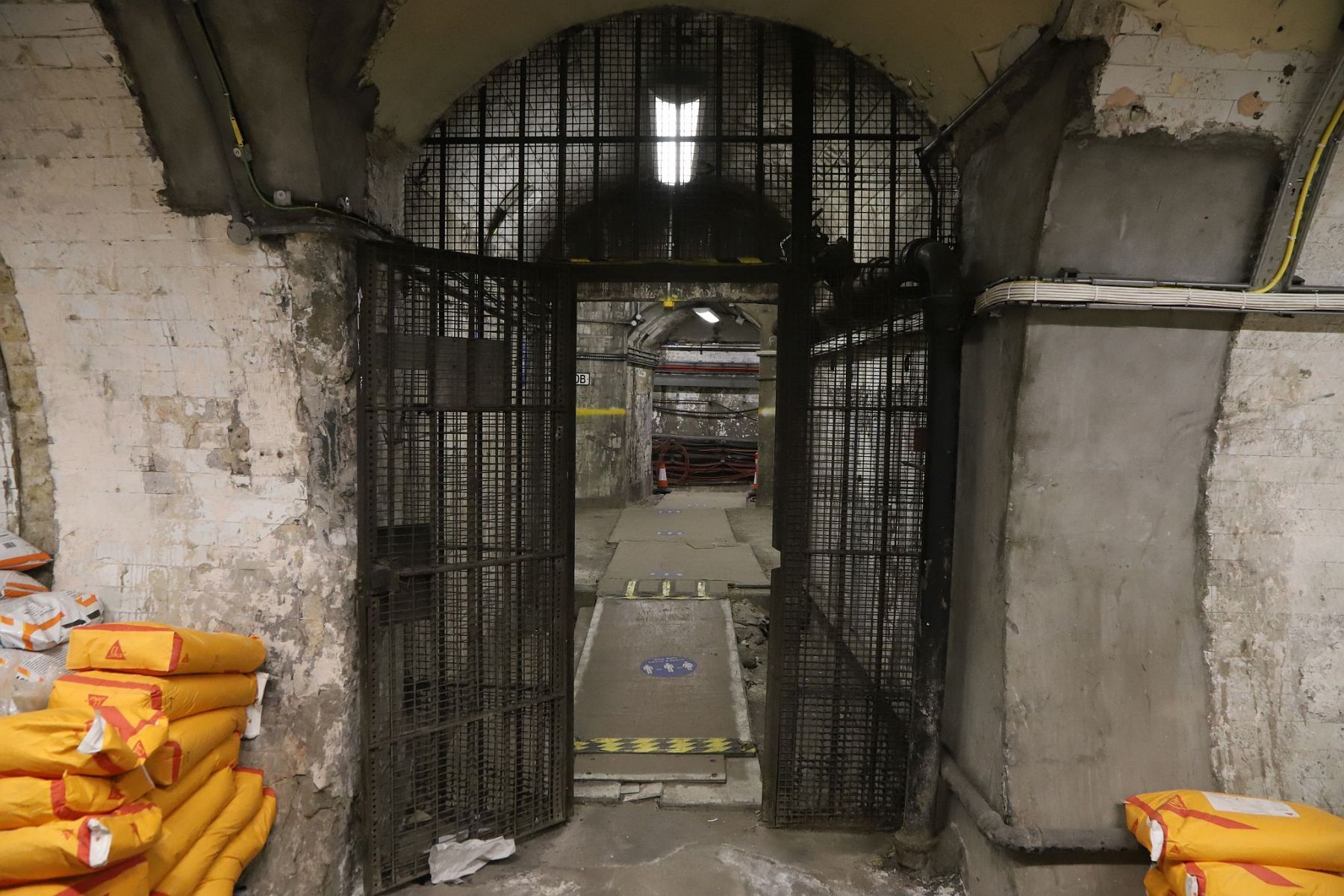 The next disused shaft was also slightly unusual being partially breached by the escalators creating an angular roof towards the top of the shaft. In the walls could clearly be seen the marks where the circular staircase would of been originally. 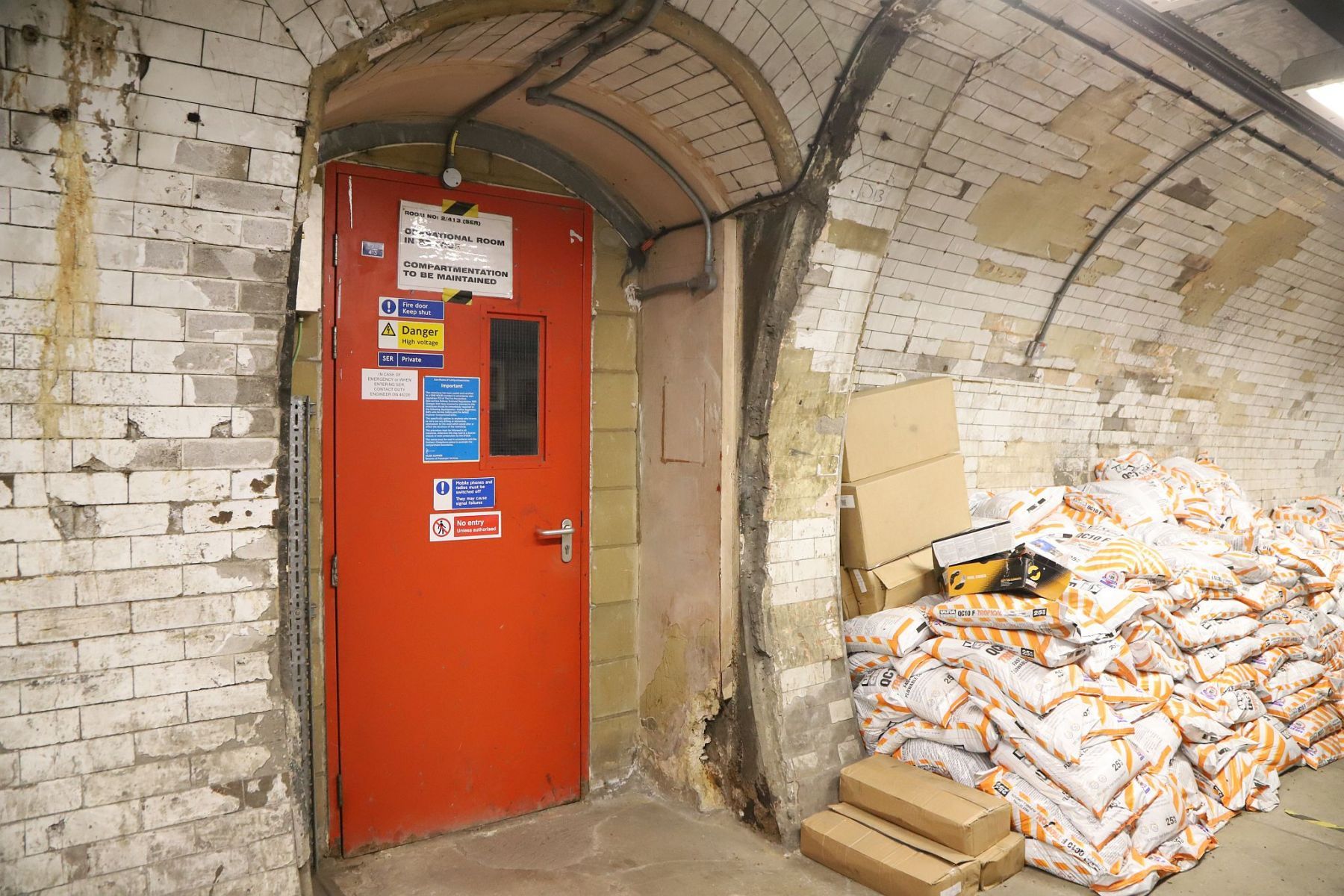 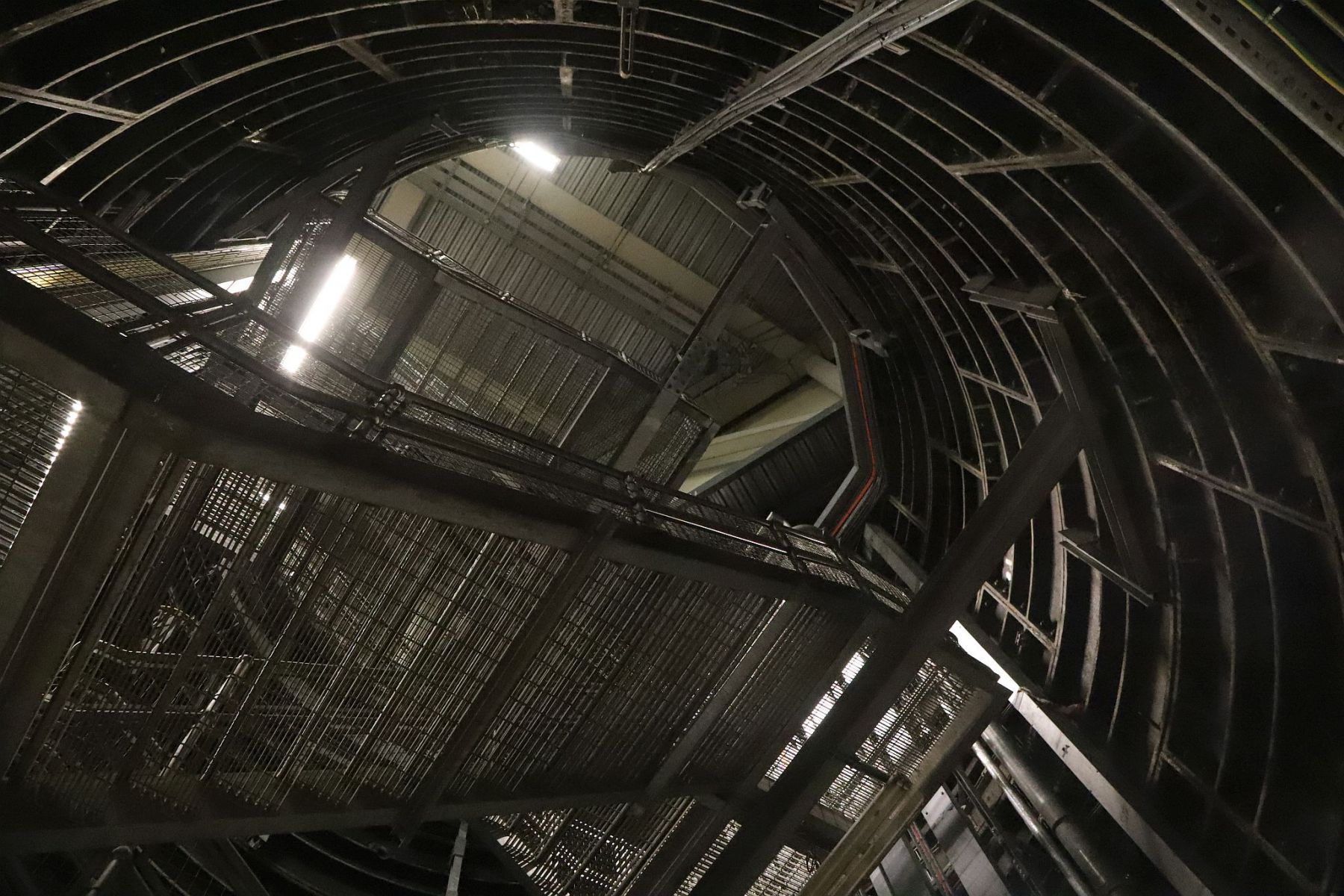 The final disused lift shaft, the fourth, contained emergency escape stairs. This picture looks directly up the shaft through the emergency stairs.

Access to shafts two, three and four is via two parallel corridors. The first ran from the double door we entered through, in a straight line and was lined with white glazed tiles to better reflect the week electric lights that would of been installed originally. 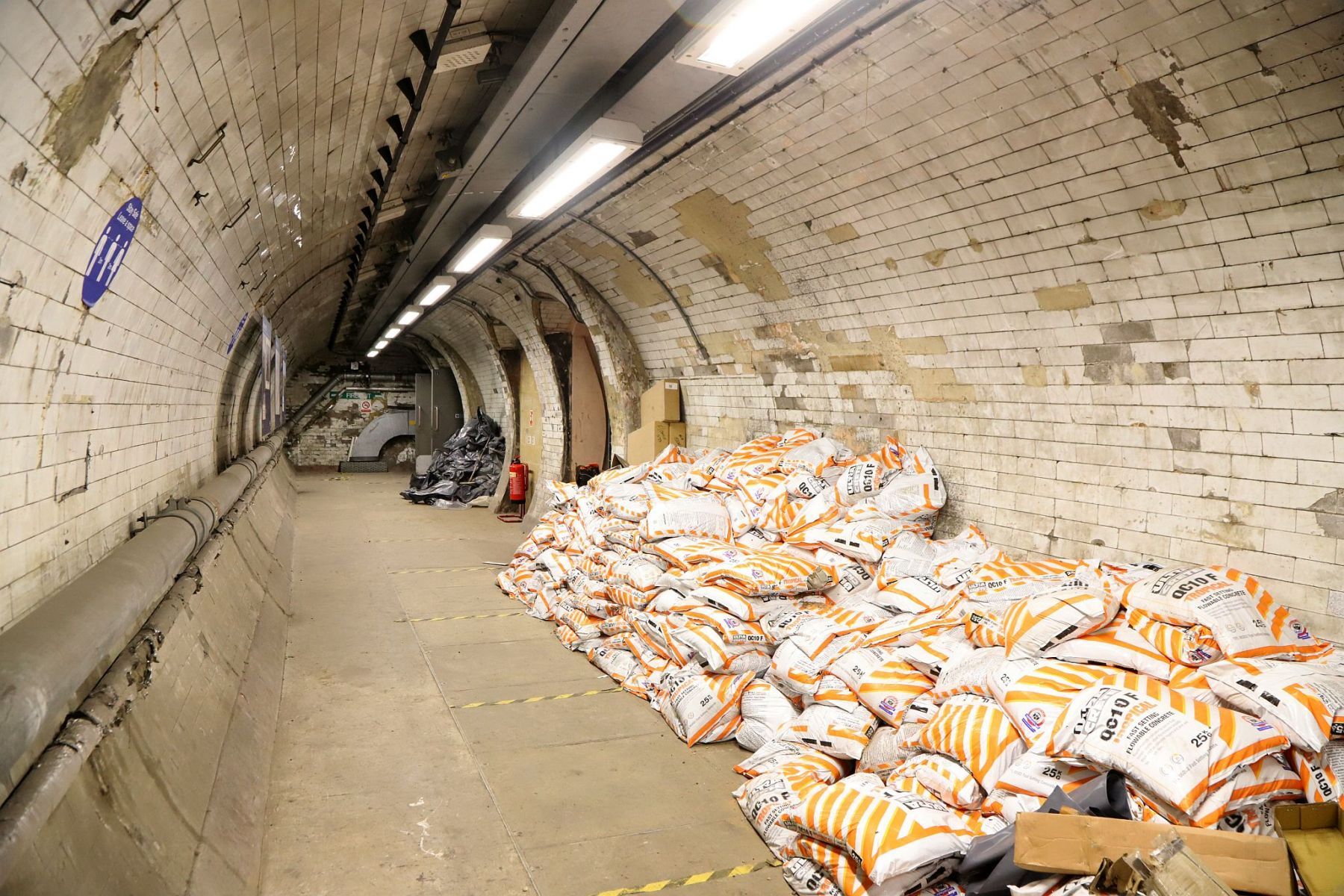 The view from the double doors looking past shafts two, three and four. 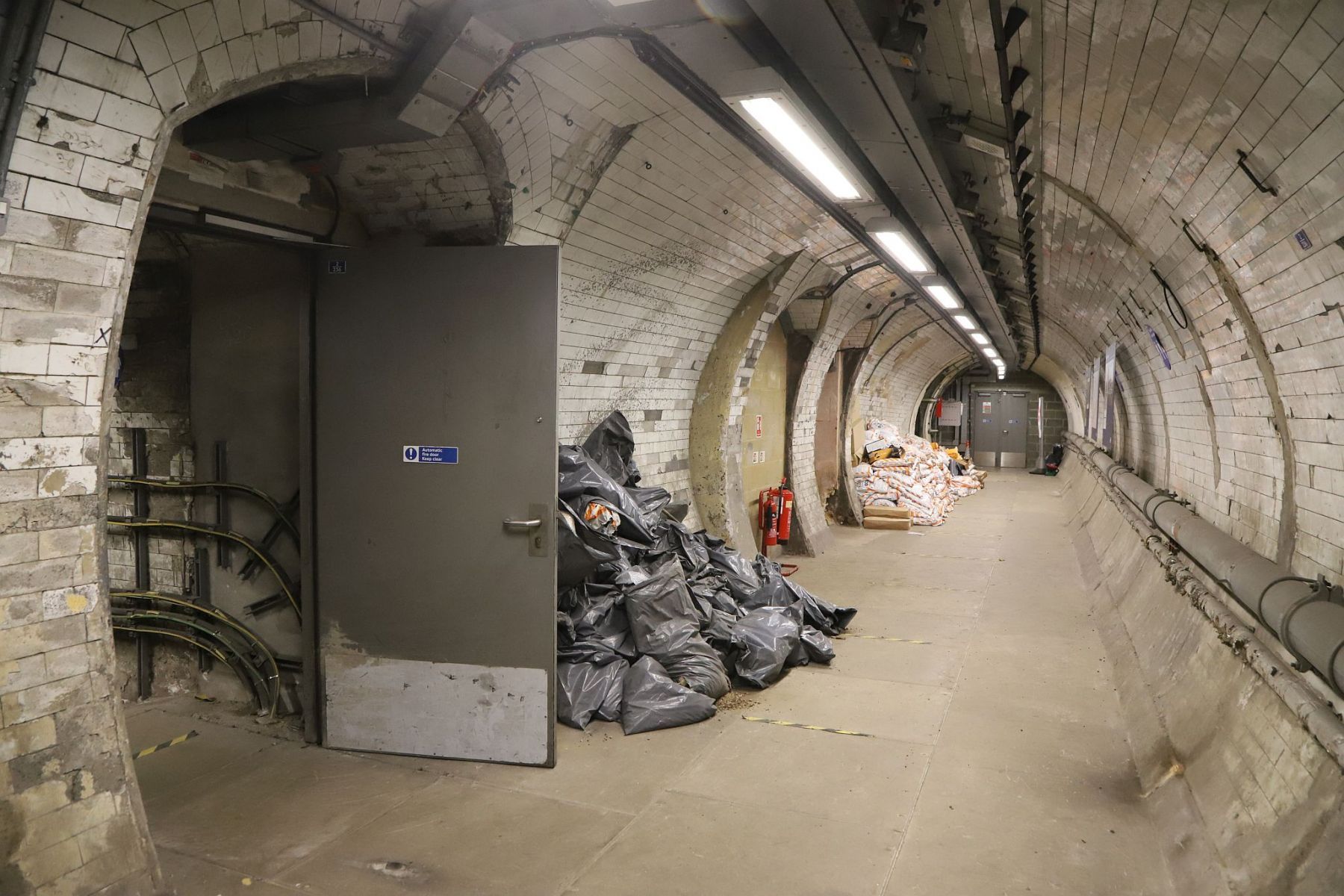 The view back to the double doors past shafts four, three and two.

Uniquely branded cement bags were stored, ready for use, between shafts two and three. 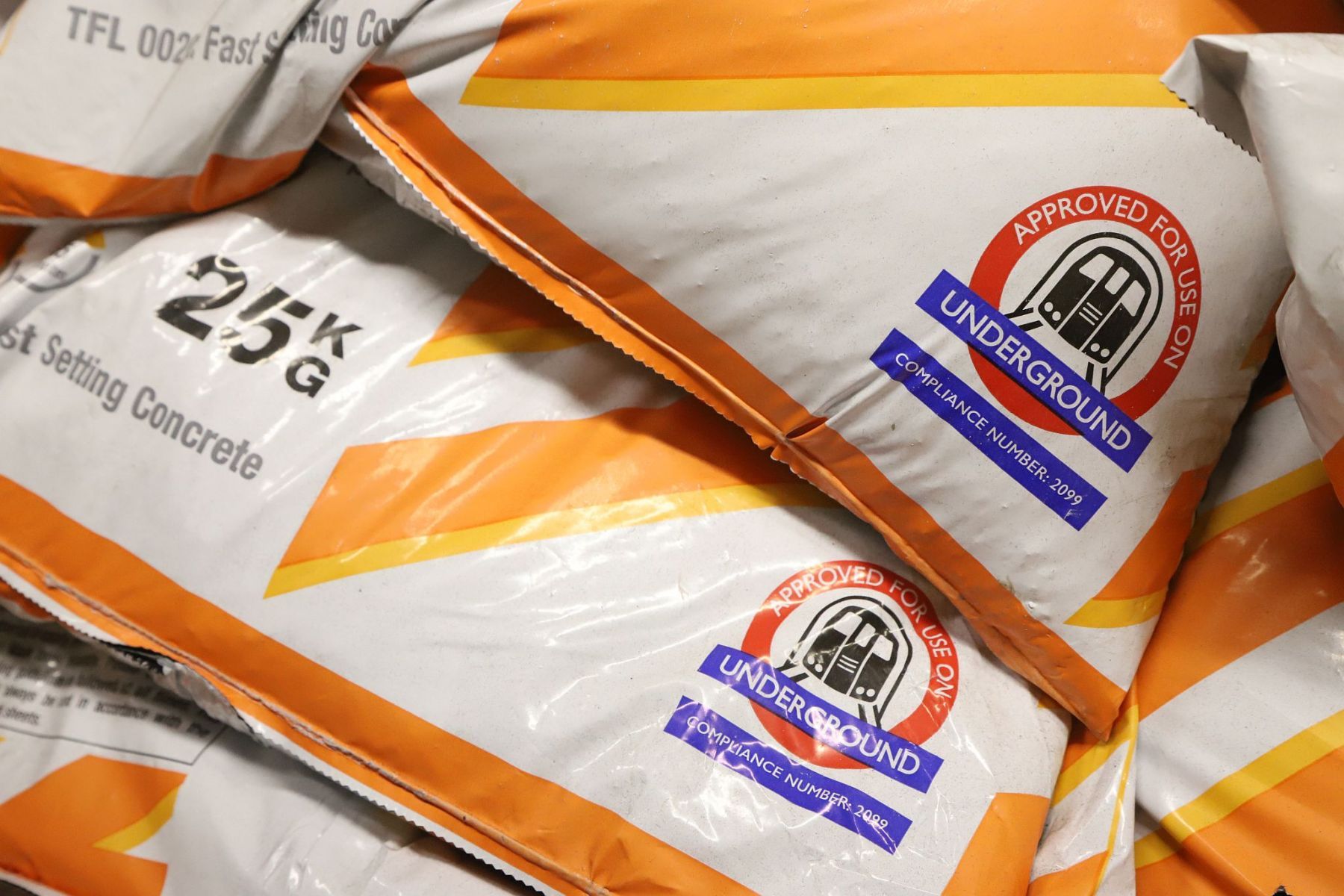 The second corridor ran parallel with the first on the other side of the disused shafts. 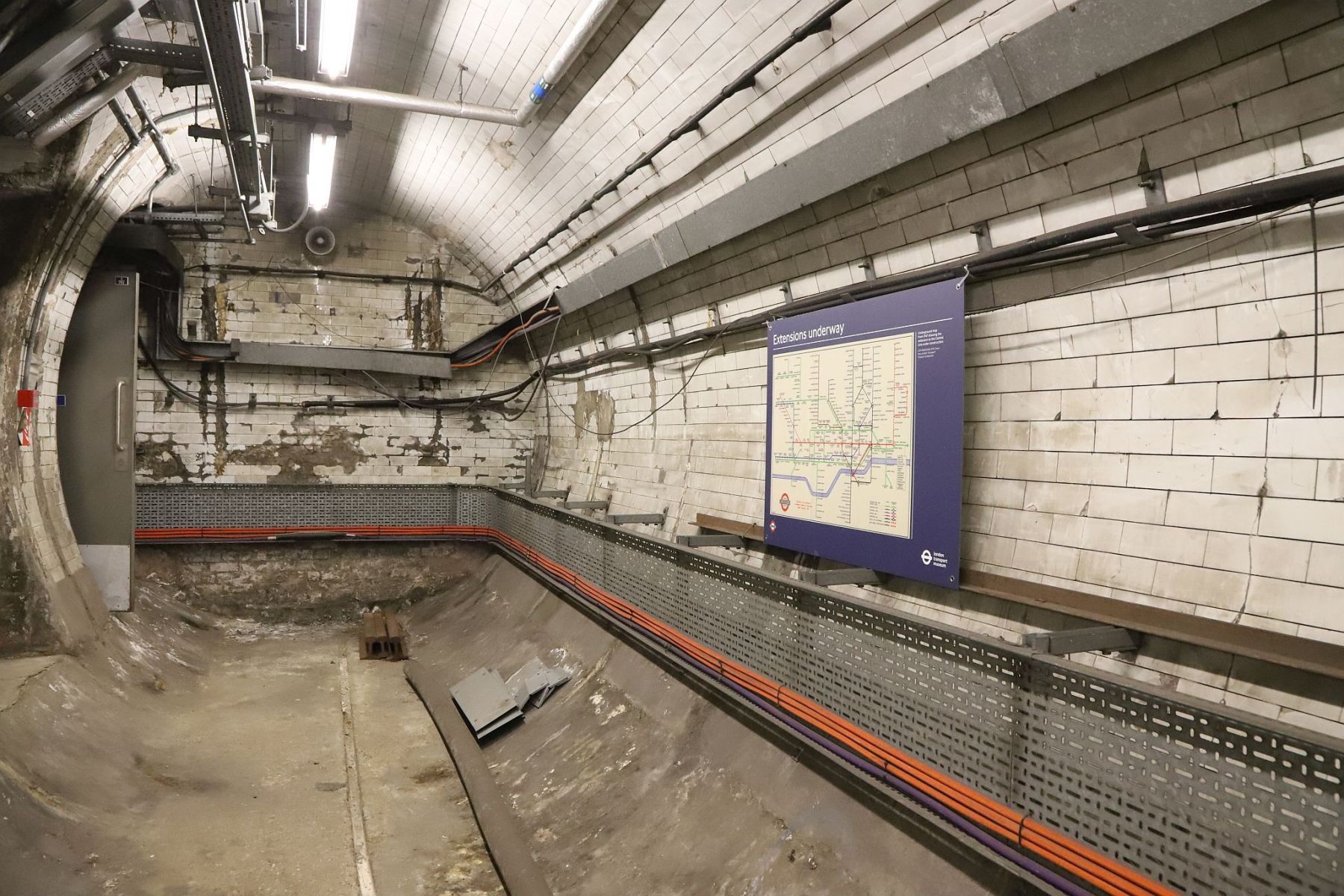 Shaft four is on the left. 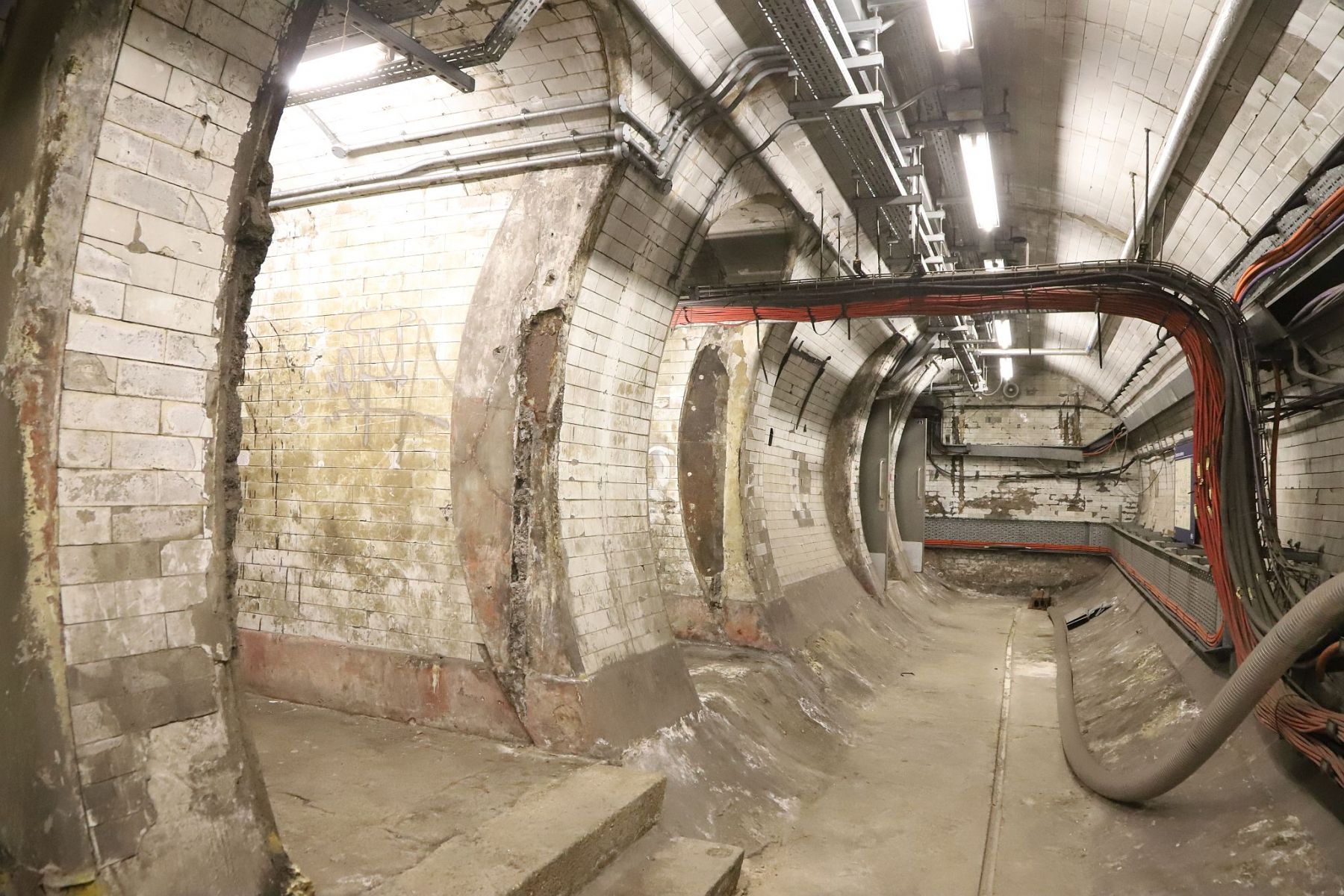 Looking past shaft three, up to shaft four on the left. 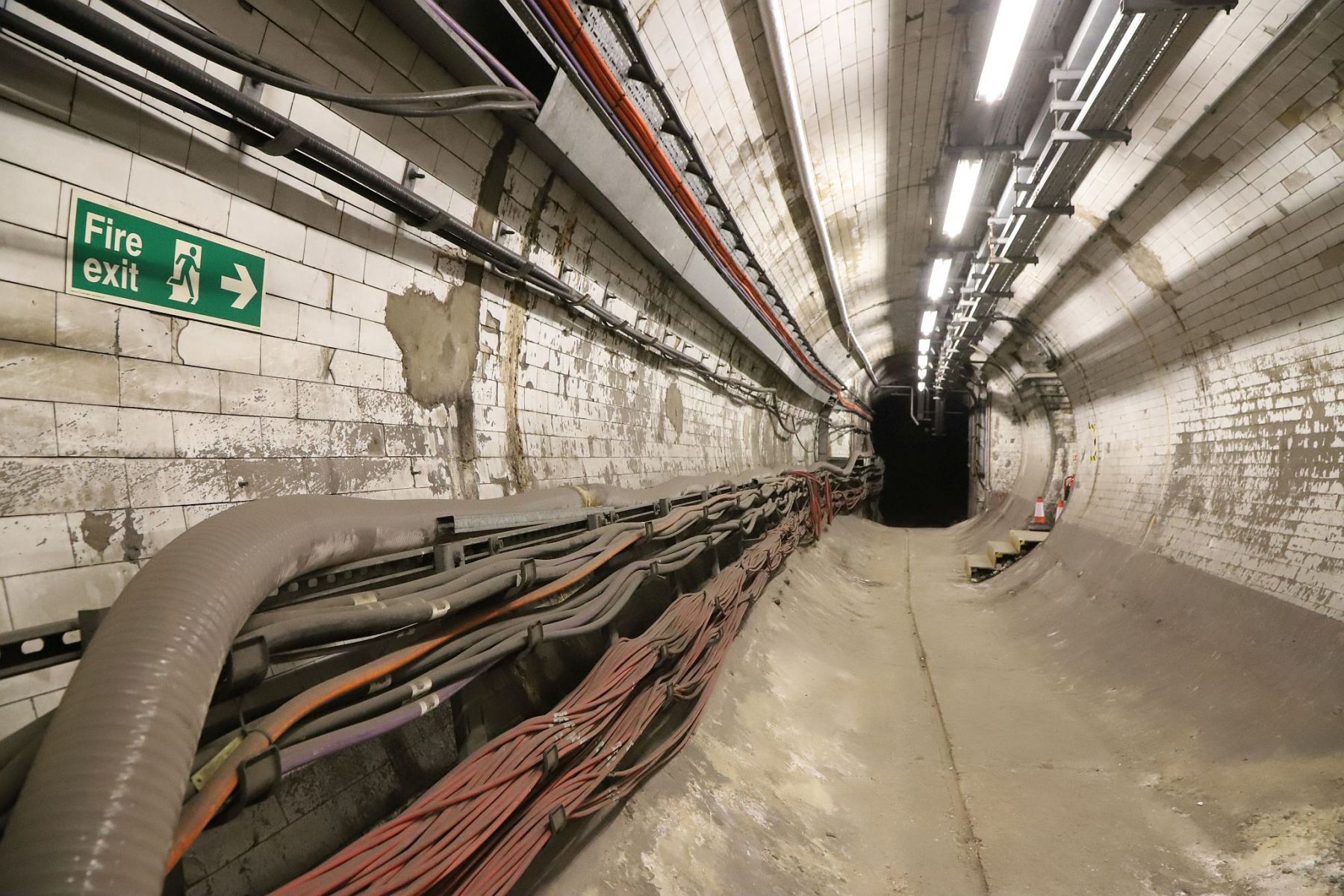 Looking in the opposite direction past the steps up to shaft two and then on through the dark into the 1970s ventilation tunnel.

A short tunnel, it was dug in the 1970s using a mixture or tunnel lining rings from the Victoria Line and some left over from the Post Office Railway. 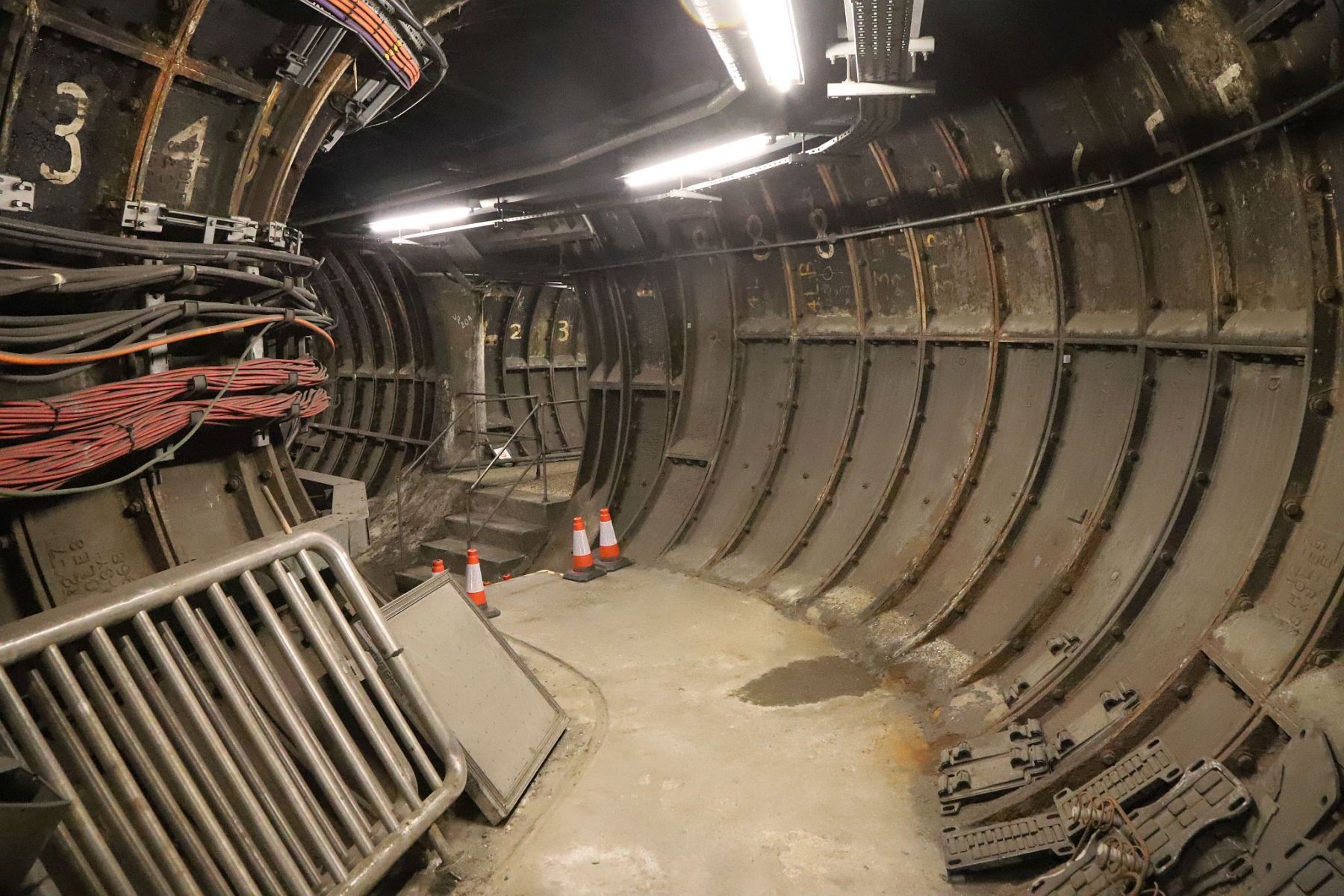 Looking down the “new” ventilation tunnel. The steps are the same as those in the next picture. 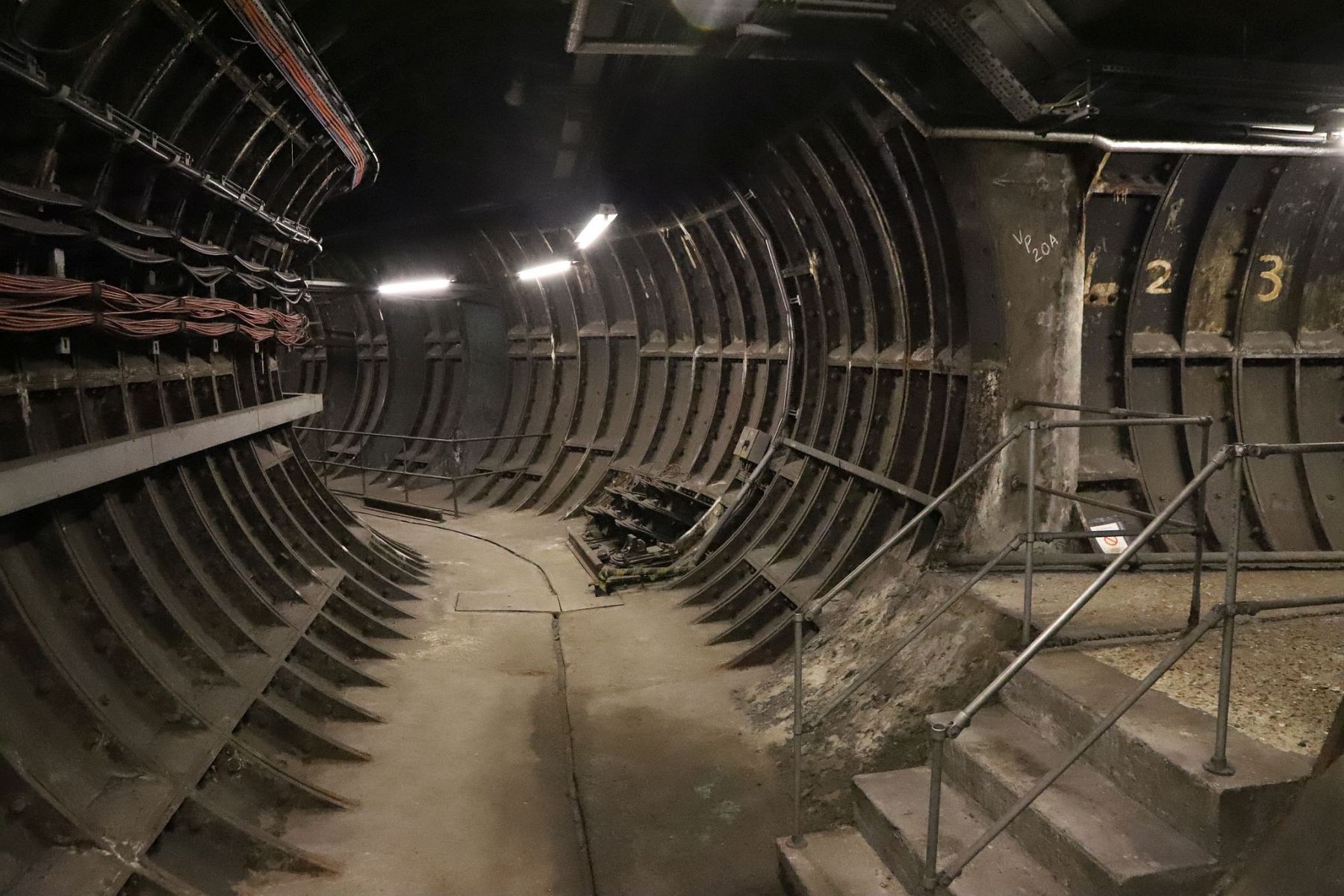 The steps lead into a short tunnel which ends in a ventilation grill at the bottom of the escalators. 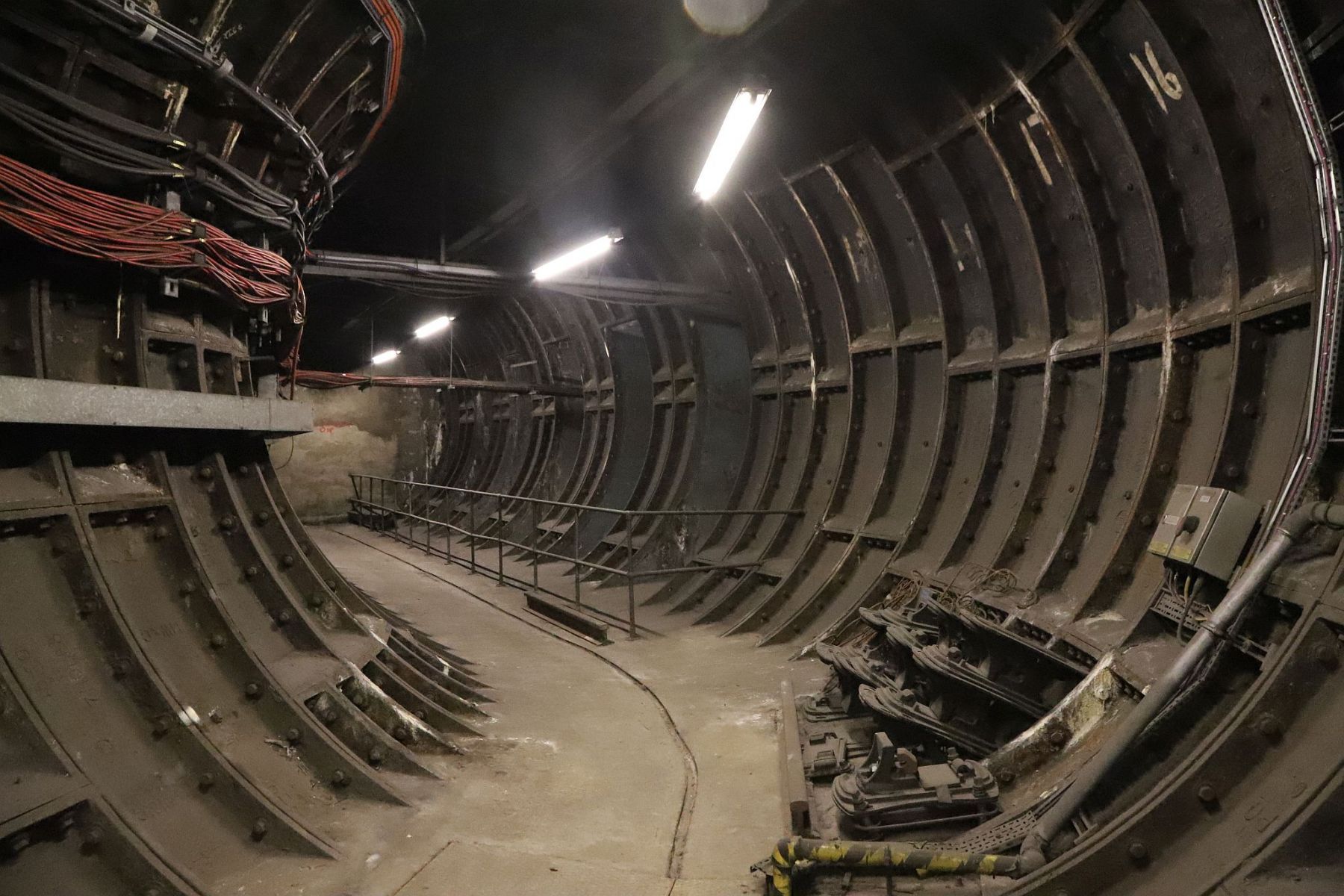 Looking past the tunnel split to the tunnel end. The gaps in the tunnel rings on the right of the pedestrian barrier are the slots for air to flow through into the station. 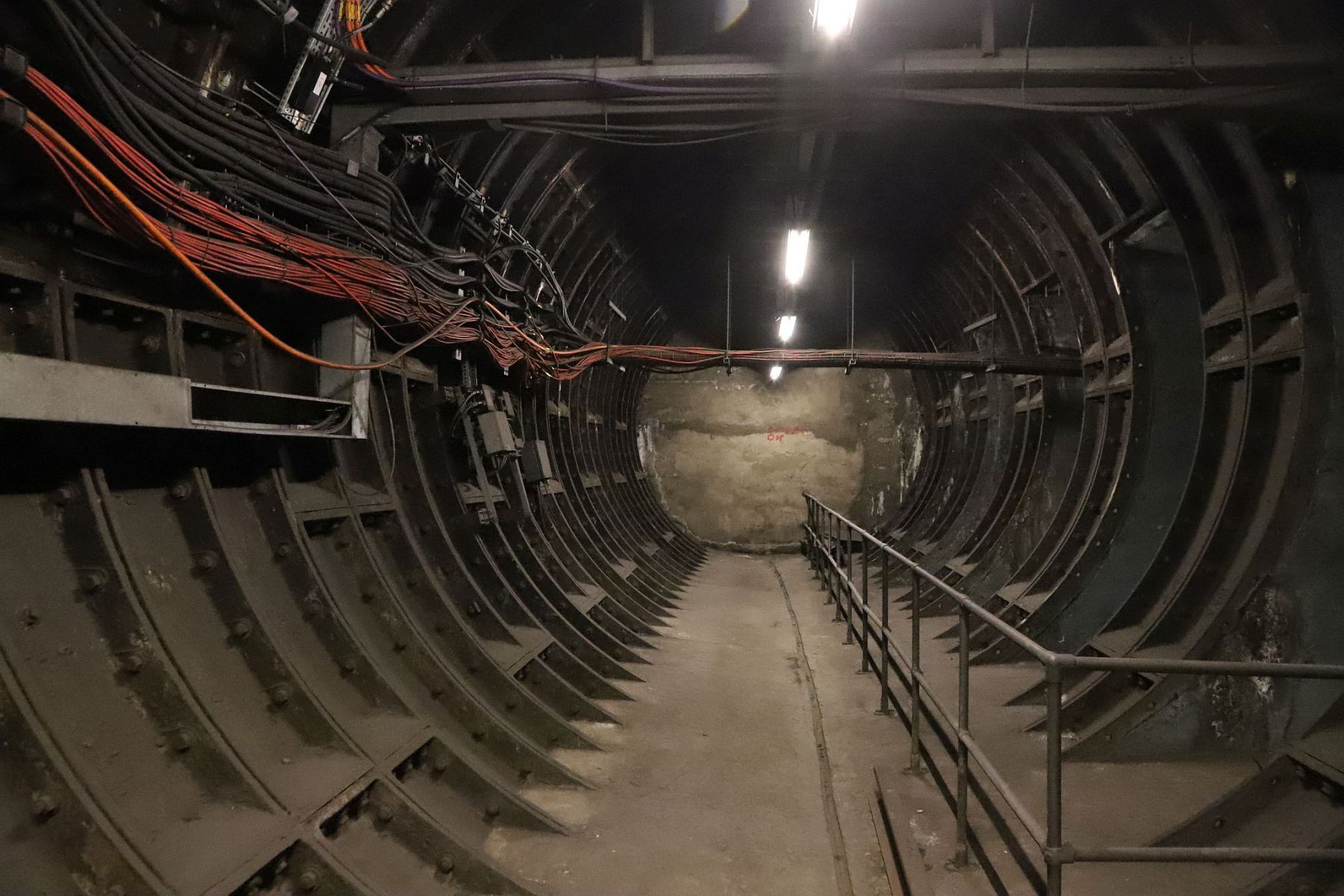 The gaps in the tunnel rings on the right of the pedestrian barrier are the slots for air to flow through into the station. 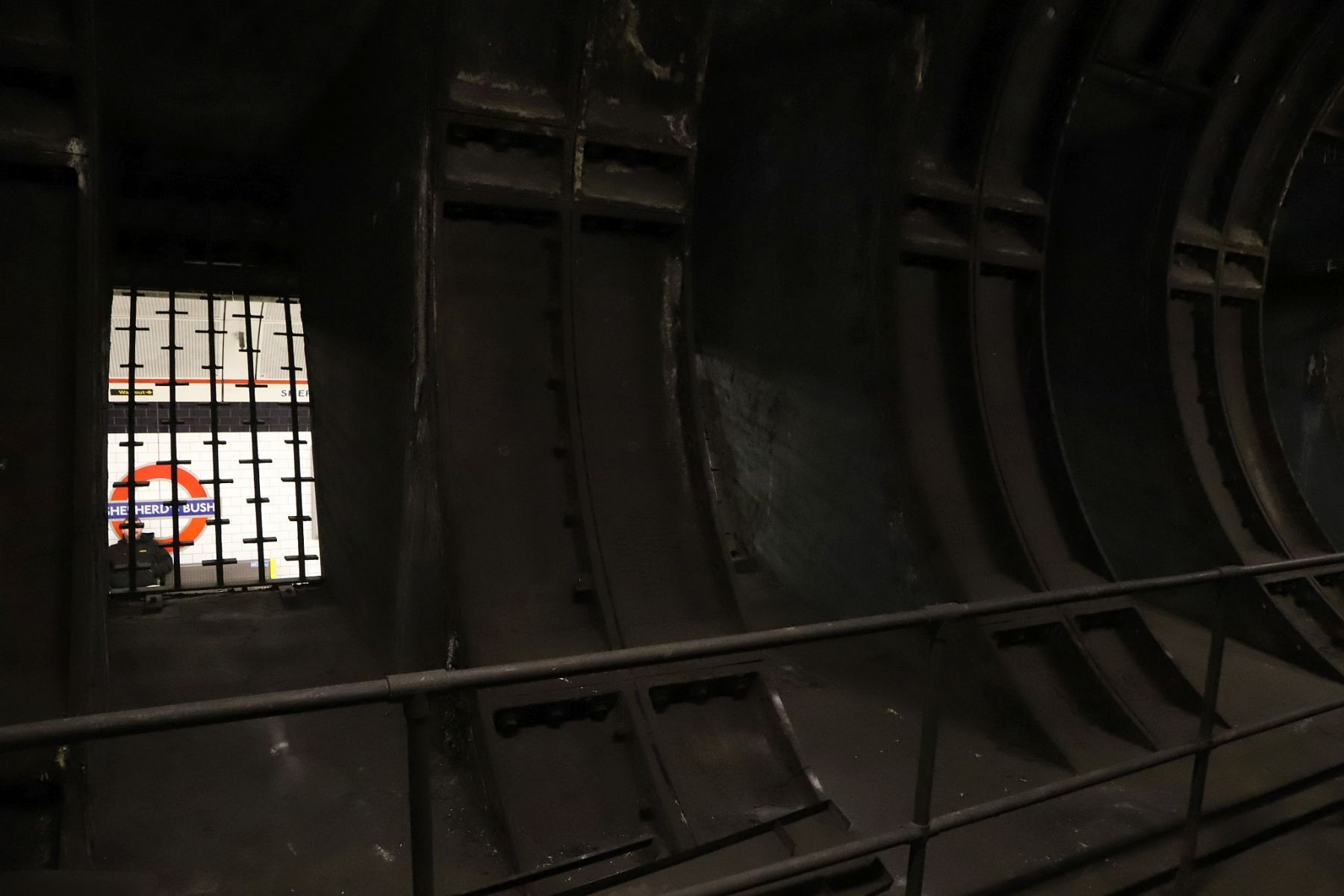 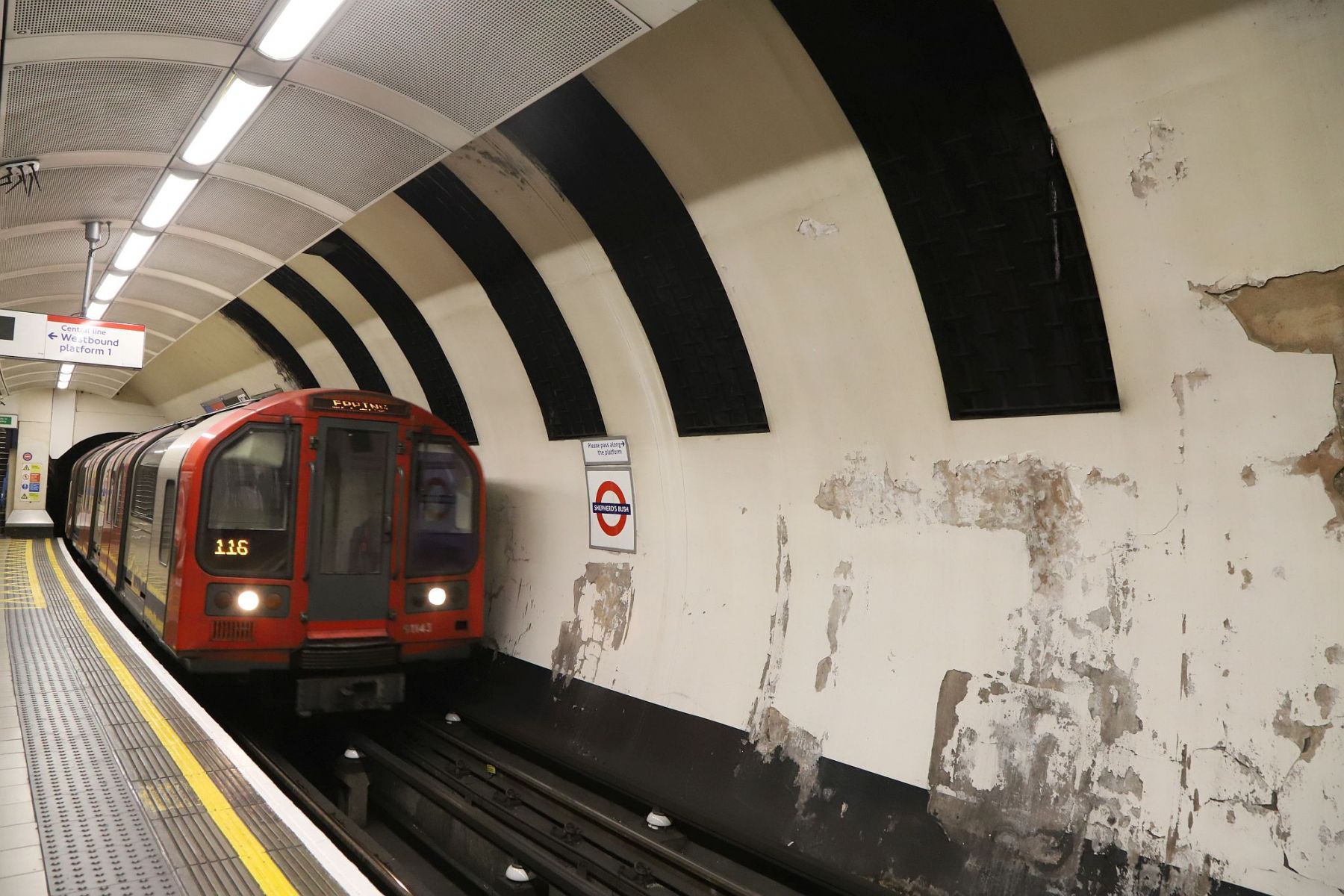 The ventilation grills from the platform side. The Shepherd’s Bush station sign was seen through the grill on the far right. 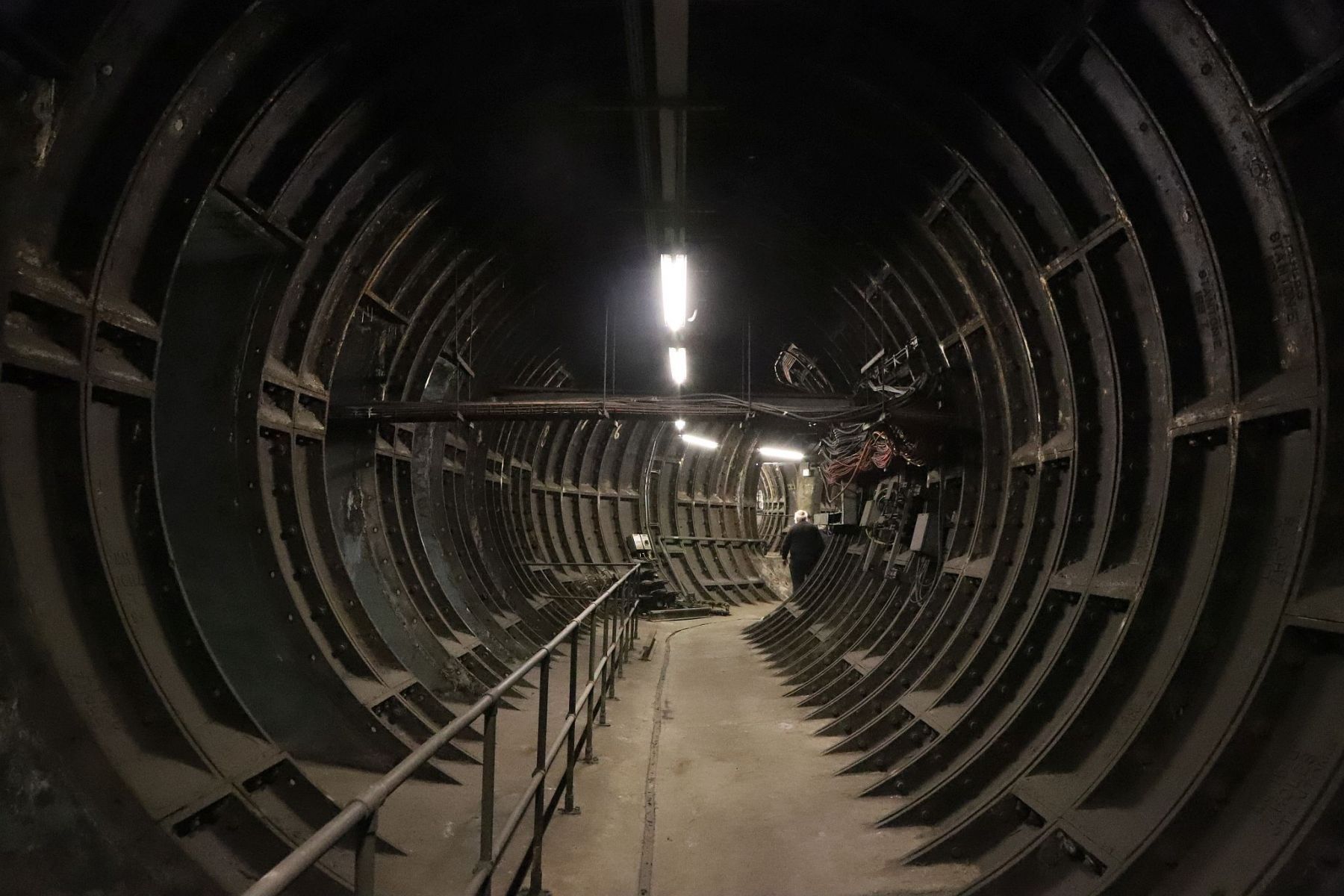 Looking back from the tunnel end, with the platform ventilation slots on the left, back towards the tunnel split. 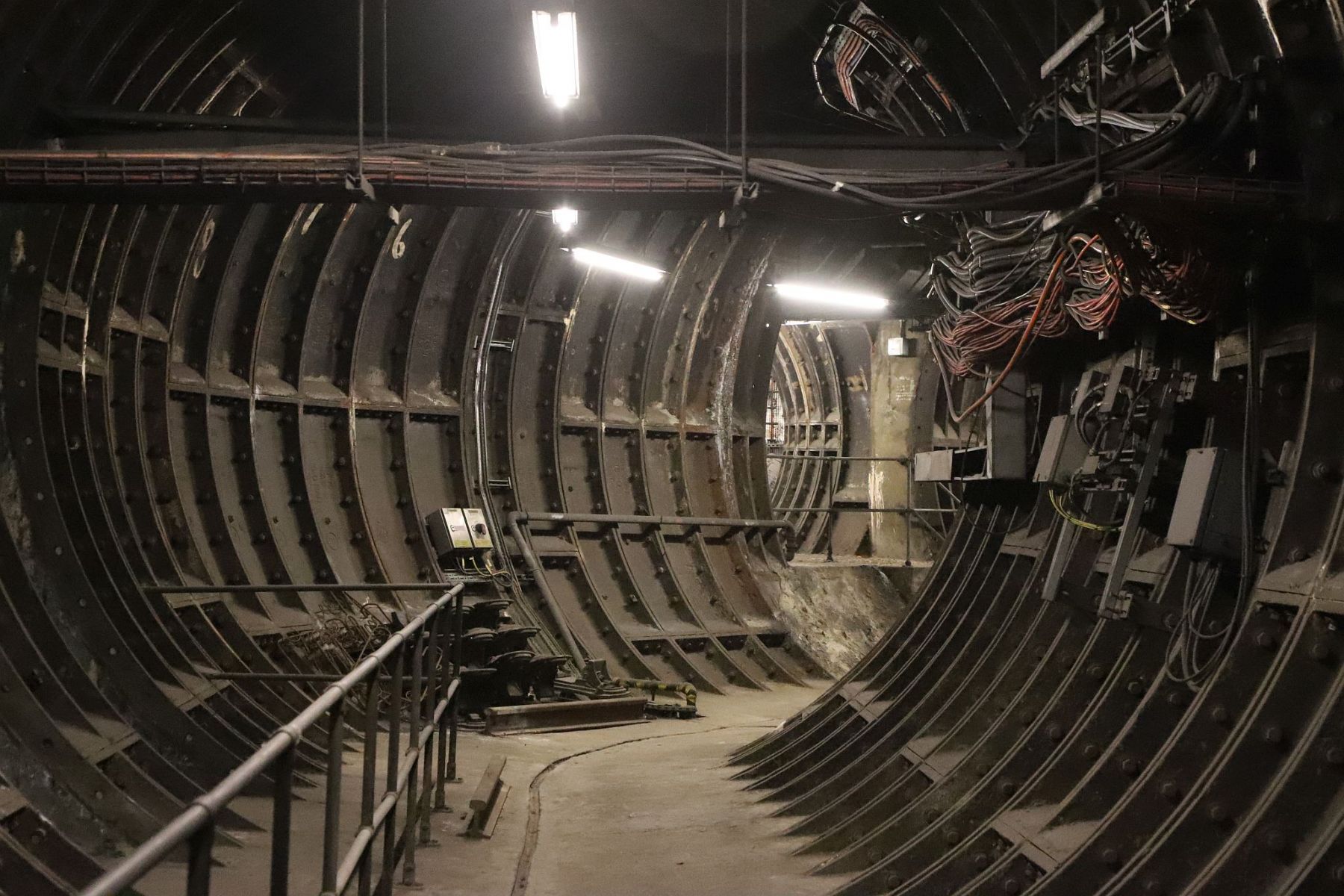 A closer view looking down the ventilation tunnel back to the tunnel split. 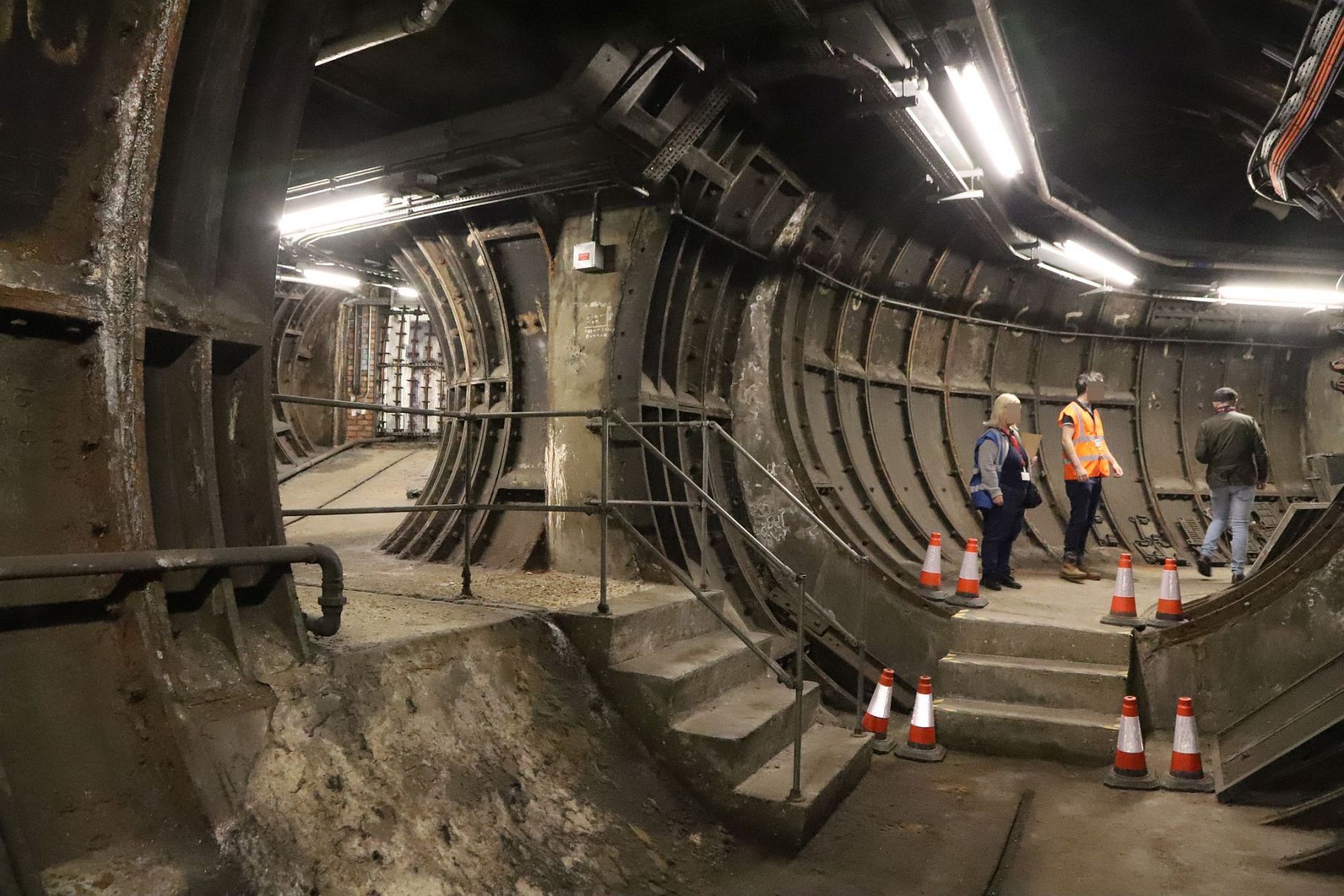 The tunnel split. The tunnel curves around on the right back to shafts two, three and four. The tunnel to the left is the short tunnel leading to the ventilation grill at the bottom of the escalators.