Museum of the Moon at the Old Royal Naval College

With the Museum of the Moon installed, The Painted Hall looks very different to my last visit 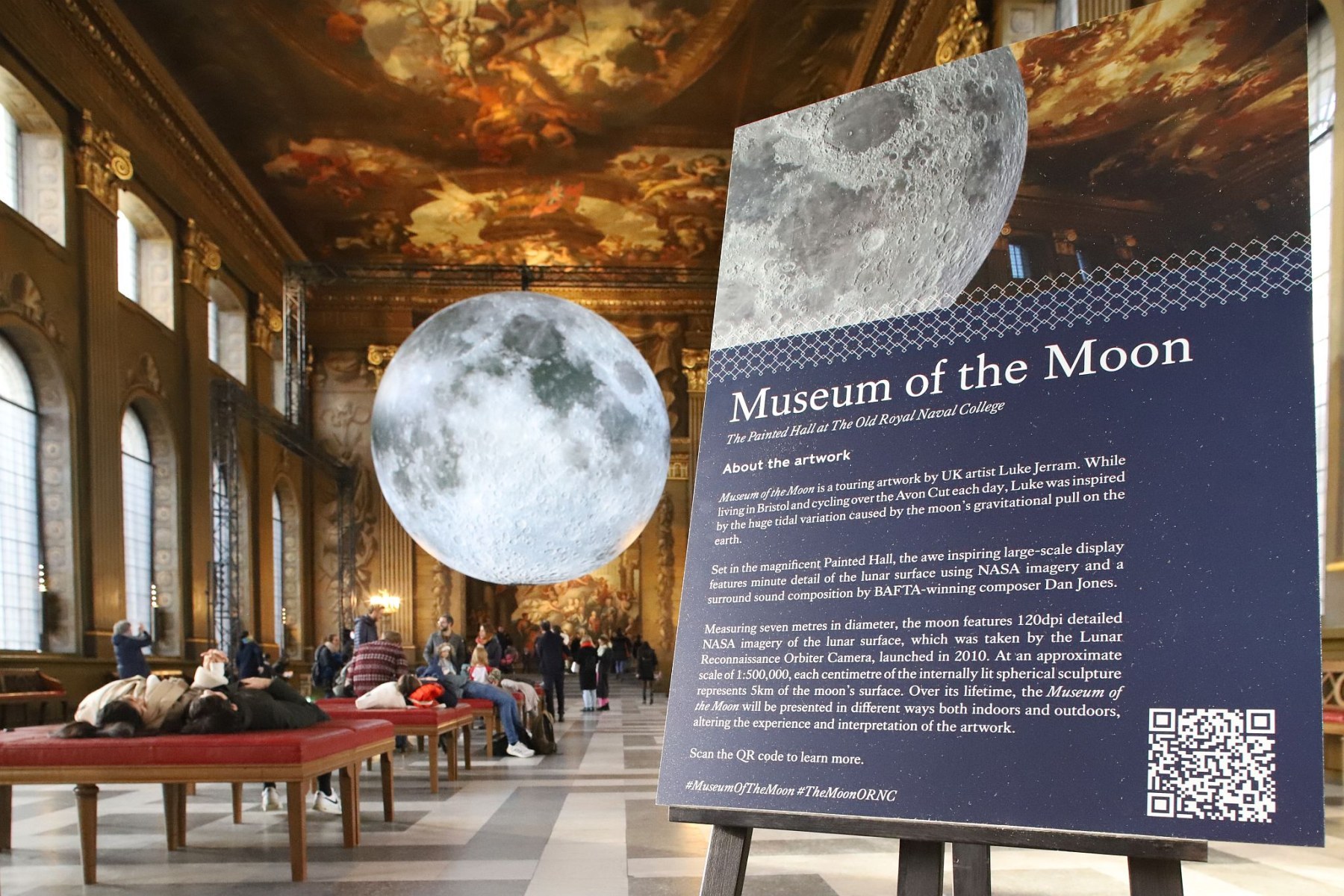 The entrance to The Painted Hall is up a flight of steps (there is wheelchair access) which double back on themselves. As you turn the corner to walk up the final flight of stairs, the Moon is suddenly there; floating at the far end of the hall making people stop dead and take a photograph. 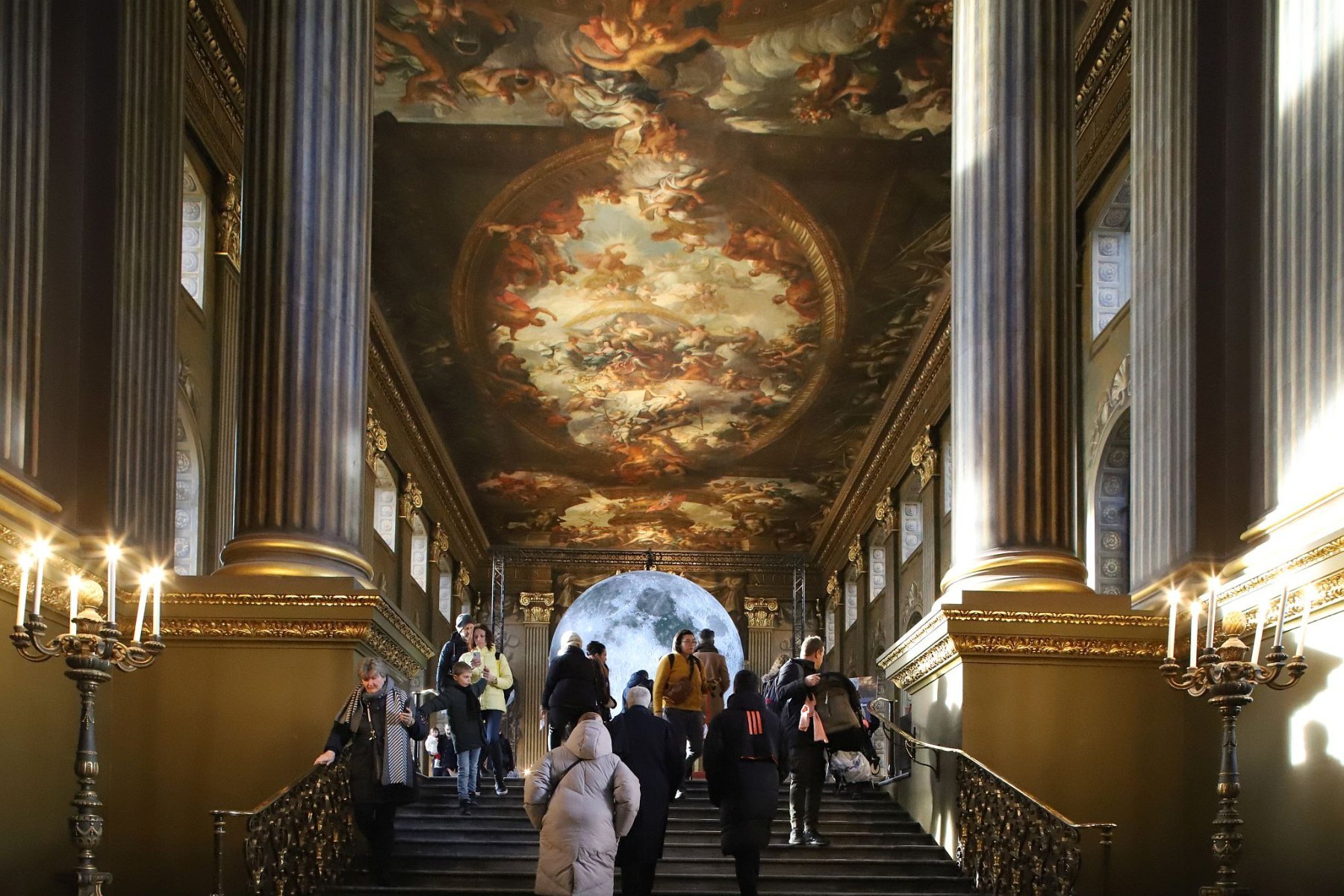 The “Museum of the Moon” is a giant inflatable ball on which is printed satellite photographs showing all the craters and geographic features of the Moon’s terrain. It is a giant globe of Earth’s Moon. In some of the pictures from the hall it looks almost superimposed on, but it is not – it is just the contrast between the vibrant colour of The Painted Hall and the monotones of the Moon. 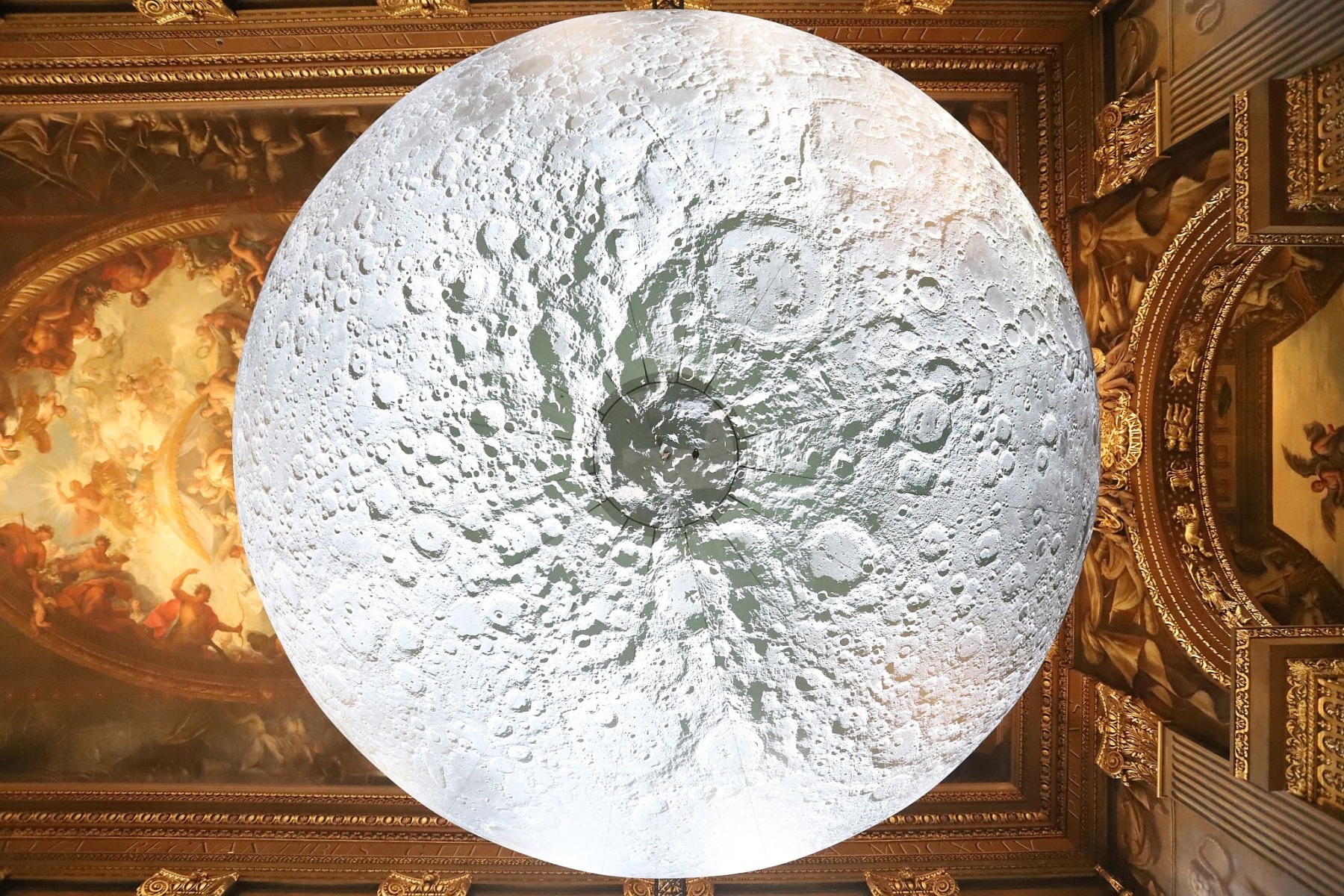 The Painted Hall itself deserves to be better known, especially as it has featured in “Pirates of the Caribbean” amongst many other film and TV appearances. The Hall has seen generations of Royal Navy officers pass through its doors and was where Admiral Nelson lay in state after his death at the Battle of Trafalgar in 1805. 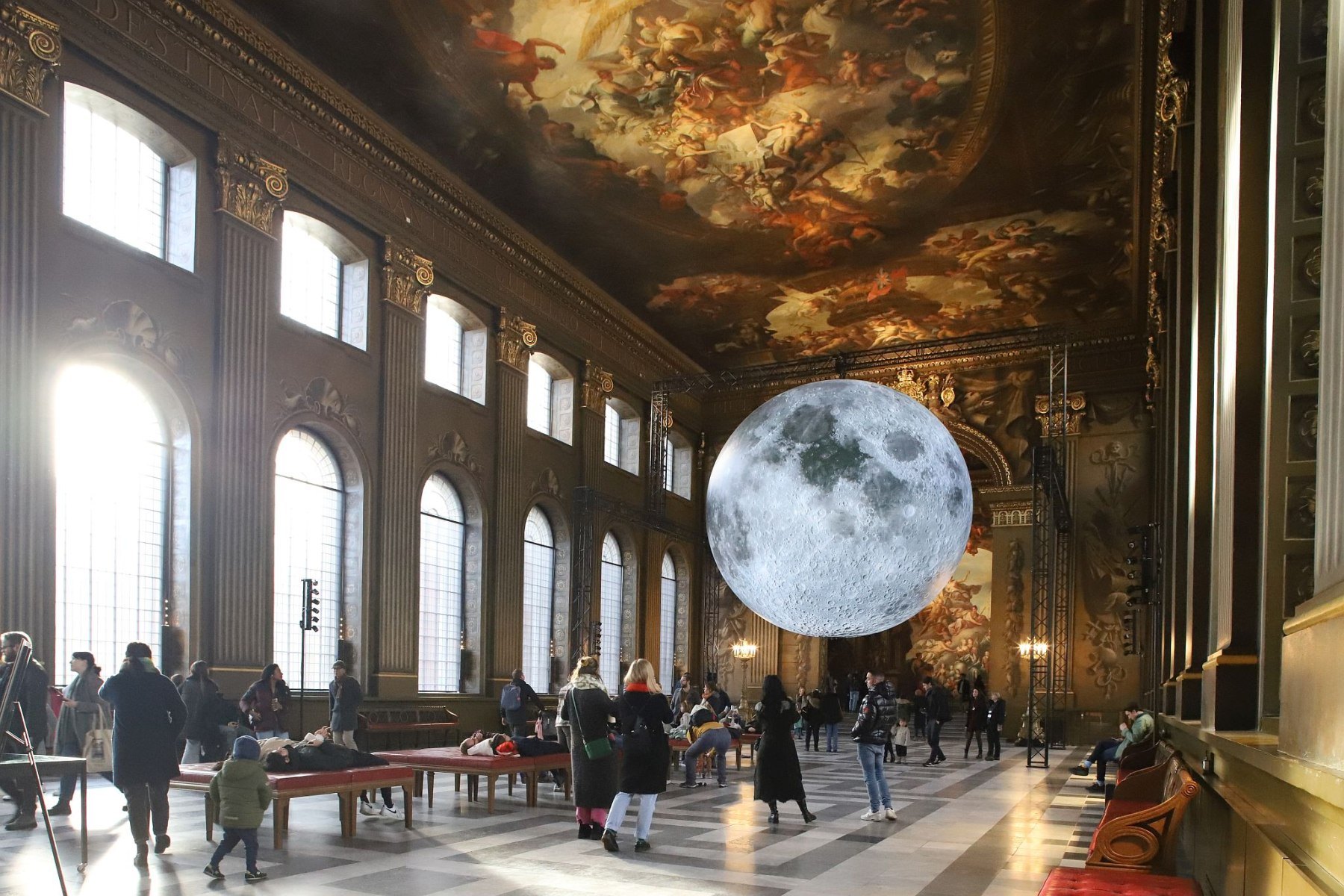 The View From The Upper Hall 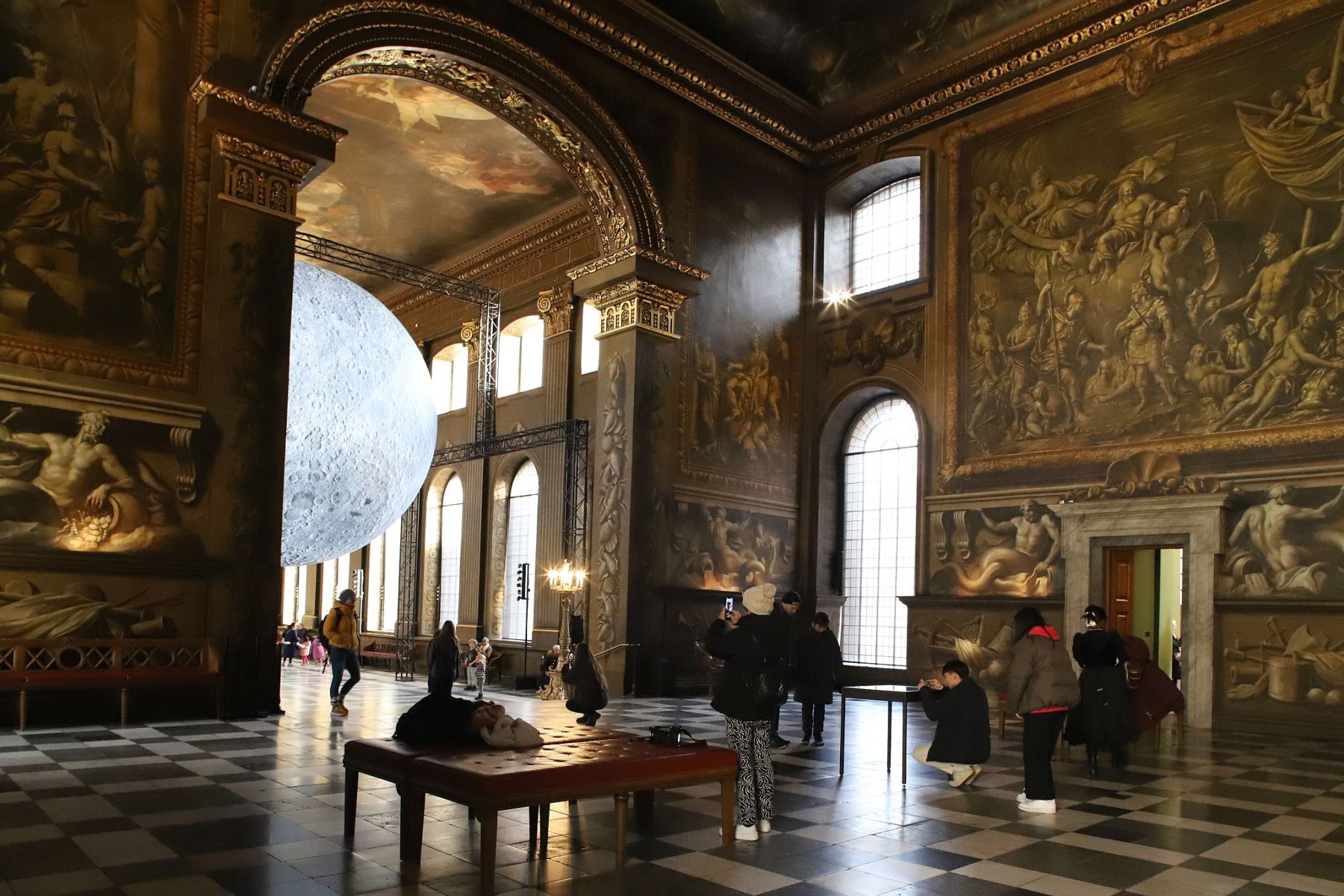 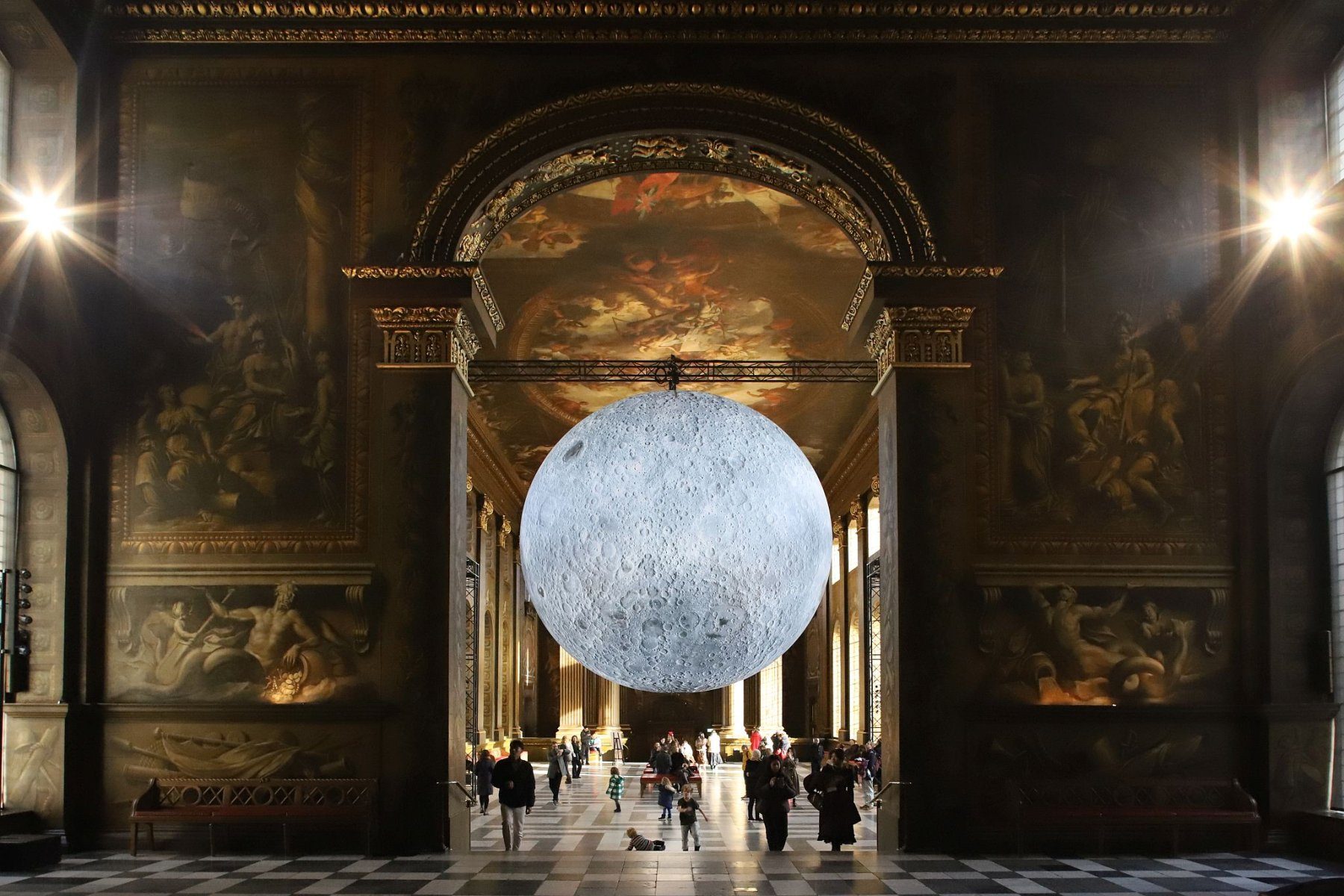 The Ceiling Of The Painted Hall

Whilst Moon makes its presence known and is the big attraction for visitors at the moment, it is not so dominating that you can’t appreciate the majesty of The Painted Hall on its own merit. The four pictures show the ceiling of The Painted Hall at the Old Royal Naval College in Greenwich. The far left is the Eastern end with the top of the pictures being North. 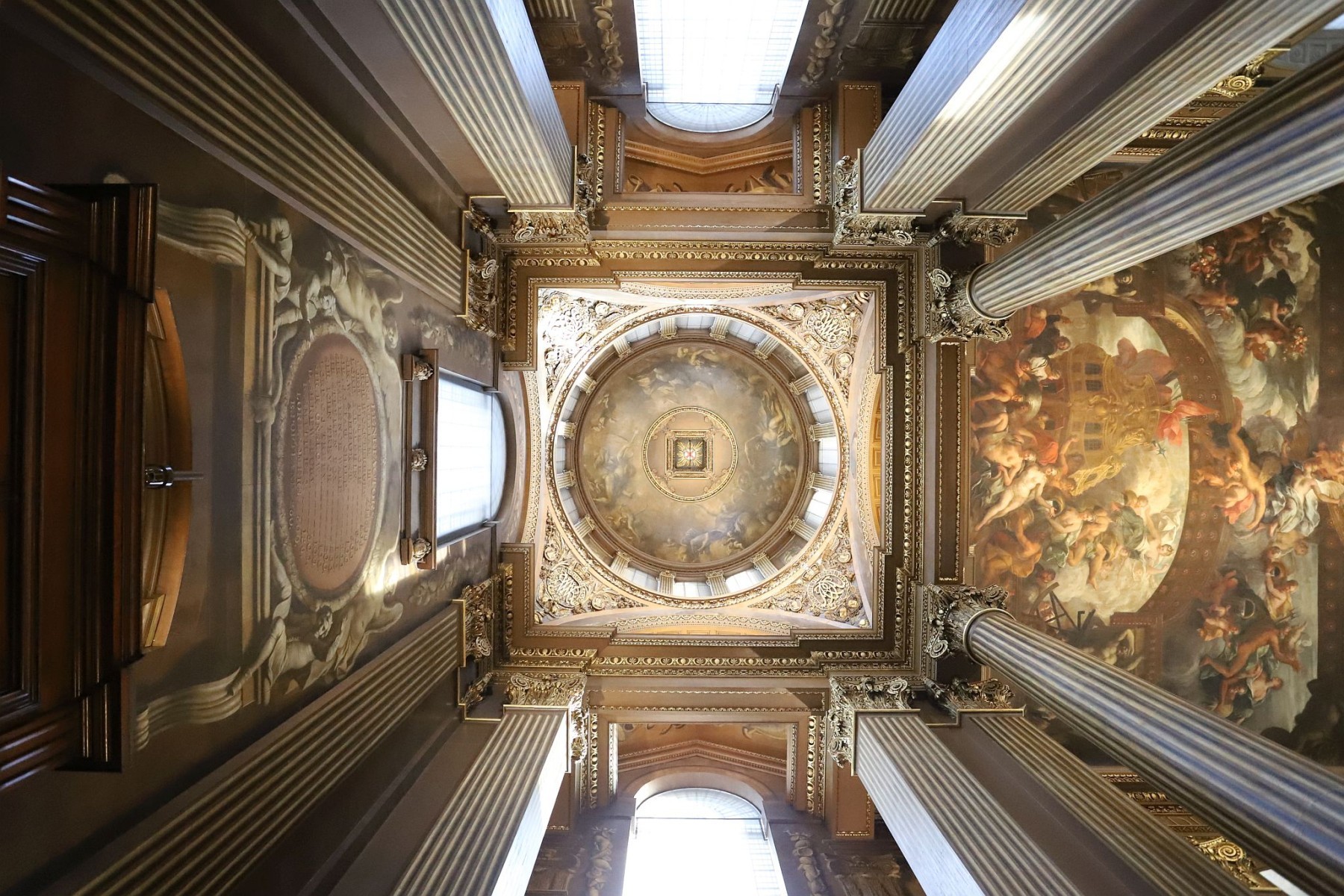 The Vestibule:
Taken from the bottom of the steps leading up to the main hall. 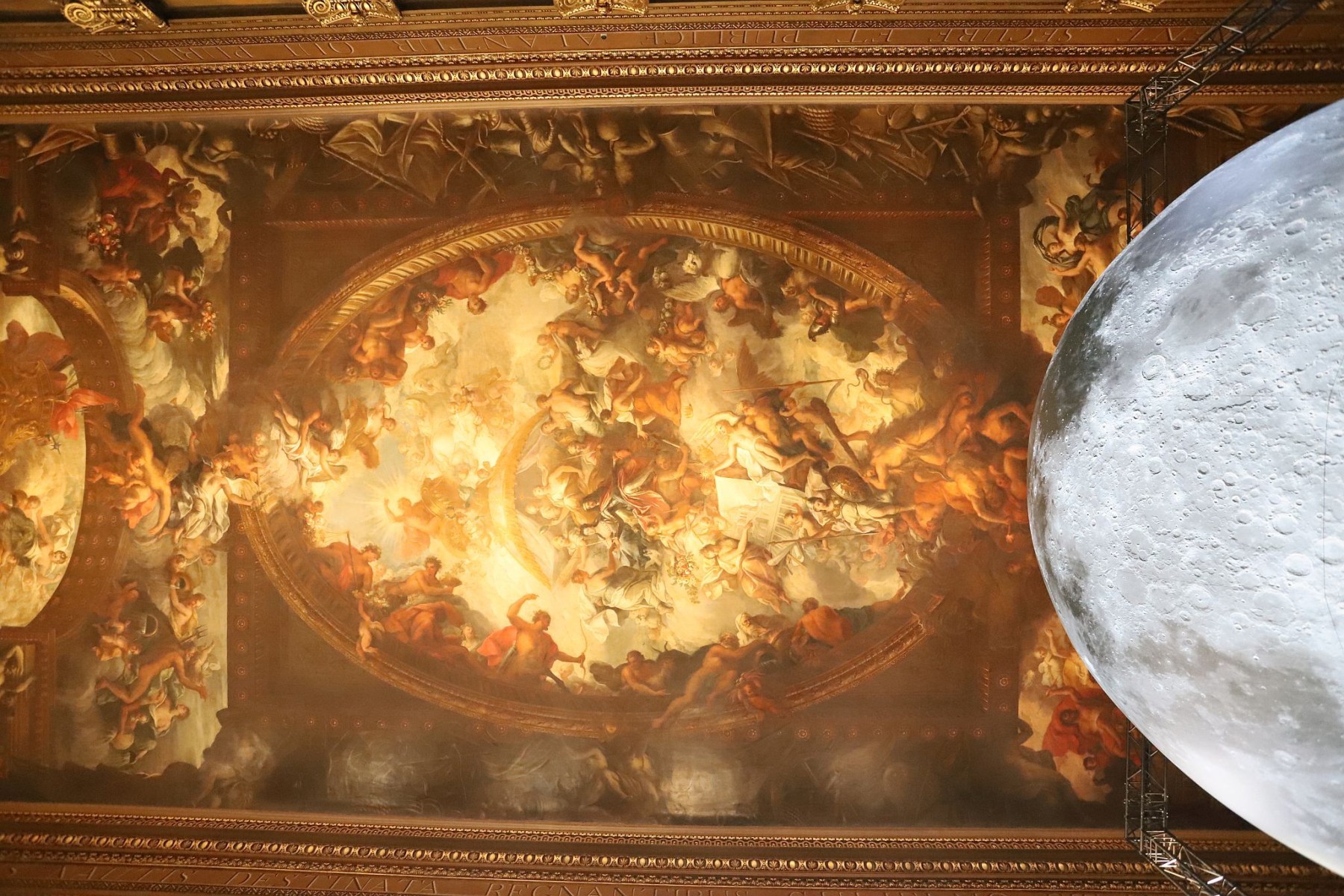 The Lower Hall:
The main picture in the centre of the ceiling.

The Lower Hall:
Luke Jerram’s “Museum of the Moon” seen from underneath. 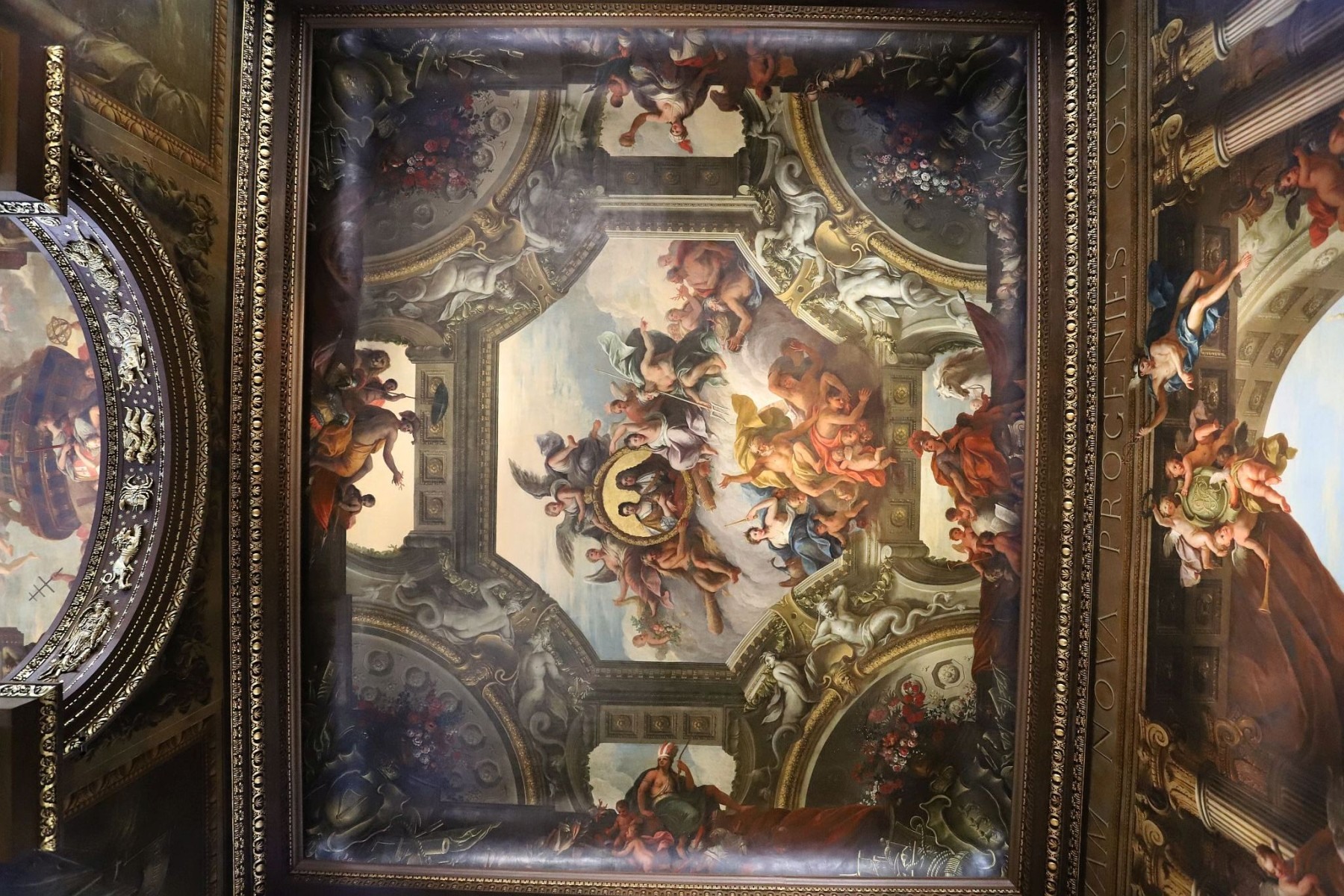 The Upper Hall:
The area where Nelson lay in state, the great wall mural to the right (West) side of the picture.

Click and drag the images, just like Google Street View to see The Painted Hall from any angle.

You’ll see that the vertical lines in the pictures are mostly straight up and down. These were straightened by using the shift function of a Canon 24mm TS-E Tilt and Shift lens. Tripods can’t be used in The Painted Hall so all pictures were taken handholding the camera with ISO set as high as 12,500. Even at that high an ISO setting, the Canon EOS 6D Mark II produces clear pictures.

Those photo were taken by lying the camera on the floor along the centre the hall. A 17mm lens was only just wide enough to get the whole width of the ceiling into the picture. Controlling the camera through a smartphone app over Wi-Fi allowed me to line it up just right. Standing back from the camera so I was not in the picture, I then took the picture by pressing the shutter button in the app.

Take on a GoPro 360 Max camera hand held above my head.